The Moby Of Moo 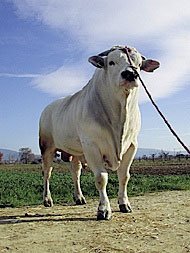 thick, slightly steaming side of beef, rising almost three fingers from plate bottom to its rugged, lightly charred surface. A few grains of sea salt strewn across the top, glittering like diamonds. The smell of fresh rosemary and olive oil (extra-virgin, naturally) filling the air.

If you’re not a meat lover, you might want to stop reading here. But you’d be missing out. Italy’s great beefsteak, the Tuscan Chianina, is a far cry from the slim, soggy specimens that often line supermarket shelves, inspiring various degrees of vegetarianism.

I should know. I come from a faux vegetarian family. Faux in the sense that we occasionally ate meat, mostly toad-in-a-hole hotdogs buried in pancake batter and cheeseburgers off the grill in the summertime. Vegetarian in the sense that vegetables were all you got. For much of the year, the closest we came to carnivore was turkey club. For a long period our mother ran a local health food store and the family went de facto macrobiotic.

Those were difficult years, chock full of such engaging treats as soybean bacon and tofu burgers. My parents failed to make a vegetarian out of me, but then I never became much of a meat-lover, either.

When I first moved to Italy, I had to admit to friends that no, I had never actually eaten a steak. For Italians steeped in the lore of an all meat, MickeyDees and Coca-Cola America, this was tough gristle to chew. They were willing to believe I’d never fired a handgun, but no steak? Come on.

For a long time I thought “Chianina” meant a cut of meat, the Italian equivalent of Rib Eye or Rump Roast. It took me two years to learn that Chianina is actually an independent race of cow, and a couple more of slow meat-appreciation accrual to dare to find out what all the fuss is about.

The Chianina race is considered by many to be the oldest bovine breed in the world. Originating most likely in and around the Tiber river valleys in what is today’s Umbria region, Chianina cows are now raised primarily in Tuscan locales like Arezzo, Florence, Livorno, Pisa, Siena and Perugia. There are also a number of foreign breeders, most notably in the U.S. and Australia (though various breed associations also exist in Canada, New Zealand and throughout South America).

The cow itself is distinctive: enormous and white, a sort of Moby of moo. There is no bigger cow in the world; a bull raised by the Tenuta della Fratta in the hills outside Siena set a world record, weighing in at 1,780 kilograms when it was eight years old. (By way of comparison, that’s 3,925 pounds… more or less the curb weight of a modern SUV!)

There is sculptural and pictorial evidence that Chianina cows were used by Romans and Etruscans for sacrifices, and in fact some of the ancient depictions of these animals, yoked to carts and decked out with ribbons and bows, can still be seen live in various festivals in Tuscany and the Marche.

Initially bred as work animals, today’s Chianina bovines are still relatively lean, muscular animals. If you have a chance to see them in the fields, you’ll notice right away that they are exceptionally tall and long-legged when compared to the fatter, squatter cows we’re used to seeing on the graze.

Off the field and on the plate, a good Chianina is everything steak is supposed to be. Full-flavored and velvet-textured, it doesn’t need anything more than salt, olive oil and a few fresh herbs as accompaniment. Save your pepper sauces and Worcestershire for supermarket meats; here you’d just be wasting taste.

The meat is tender to the point that you can cut through it in just a couple of passes with a decent steak knife. Most aficionados would probably tackle it bloody; al sangue is still a little much for me, but medium-rare is an excellent middle ground. The interior of the steak should be bright red and “raw,” while the outside cooks to a light grey and can be slightly charred if you like.

If you’re ordering your steak, the cooks will handle this for you. If you’re cooking at home, remember that you want to use the grille (a rippled Teflon grille plate will do fine in a pinch) heated over full flame before you put the meat on. This way the steak cooks rapidly on the outsides, keeping the inside tender.

While I’m the first to give tofu its due, the result is something no soybean can simulate.