The Miracle Cures of Dr. Aira 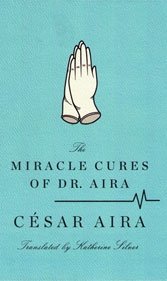 Aira’s delightful novella presents a playground of whimsical questions. Is charlatanism a state of innocence or a trick that fiction plays on itself? Is a somnambulist who talks to trees any less likely to work a medical miracle than someone who lives for “real reality” alone? Is a novel not a miracle because of what it excludes? If daily life is an “architectural construction” whose complexities overload most mortal circuitry, isn’t being a self-styled miracle worker a noble act.

In this metaphysical comic book, Aira’s dreamlike “Truman Show,” Dr. Aira is a 50-year-old Buenos Aires “doctor” — “an impenitent flaneur” — who lives at home with his with his wife but spends most of his time protecting never-tried miracle cures from the “supervillain” Dr. Actyn, a chief-of-medicine skeptic who is constantly hatching Baroque plots to discredit him (including hiring patients, ambulances and paramedics — all of them fake). The doctor never explains his cures or even gets around to writing them down. He’s mostly concerned with seeking protection from the “fanatics” who swear by “Reason and Decency,” which is the ruin of the paranormal (one might say, writer’s) mind. The theoretical doctor will get his biggest actual test when he’s asked to treat a reclusive, cancer-stricken millionaire, which he does by through a delightful exorcism that involves subtracting from the known universe.

Aira’s is something of a Latin minstrel in Kant country; a surrealist with a Keystone Kops side. Headless dogs bark. The doctor’s instruments include a bear-shaped doll. Detours matter more than the “slavery” of straight lines. For Aira, “reason is one mode of action, nothing more, and has no special privileges.” The doctor resides in a mental world “mined with the theatrical,” his medicine a paranormal art untouched by “blood and blows and shouts” and gladly freed from the persecution of facts. His characters are heroes until they’re mocked by very narrative that invented them.