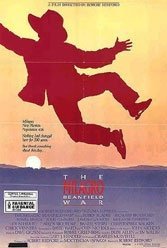 Redford’s baby gem depends on the pace of its David Grusin soundtrack, sly, comic, ironic. It’s a well-stitched David-vs.-Goliath parable that wears a droopy sombero. Milagro is a small town in New Mexico where nothing happens and everyone’s familiar with the goings-on.

Suddenly, developer Ladd Devine — who has a wife named Flossie (Melanie Griffin) — wants to put up resort. There’s a fuss, sure, with Ruby (Sonia Braga; wonderful) and newspaper chief Charlie Bloom (John Heard) leading the way. But how to agitate unduly when building a resort means jobs? Enter Joe Mondregon, who’s been stealing water to feed his farm. The Devine project would end all that. In fact, it would just about end the town’s self-reliance and delightful isolation.

That’s when things get thorny for the interlopers, and “war” breaks out. The bad guy, in sleazy style, is a man whimsically named Kyril Montana (Christopher Walken). But the lazy pace, all emotion and much compromise, is dictated by local sheriff Bernabe Montoya (Ruben Blades), who tries hard to see the big picture. Redford captures the mood as if he’d made up life on Mars, navigating deftly between the laid back and the philosophical. This is a Reagan-era “little people” movie that never condescends. John Nichols, author of the eponymous novel, also wrote the screenplay.