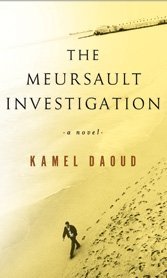 By Kamel Daoud, translated from the French by John Cullen

It would seem a fool’s errand to attempt a re-conjuring of Albert Camus’ “The Stranger” from the perspective of the nameless Arab that Camus’ aloof protagonist Mersault murders for obscure reasons on an Algiers beach in 1942. First, “The Stranger” is a benchmark in the postwar literature of estrangement, with Mersault a lasting emissary of gratuitous folly. Second, all great literature possesses its own genetic code, seemingly impenetrable to anyone but the author. Remarkably, however, Moroccan journalist Kamel Daoud, not only accomplishes this revival, but also creates a companionable if not essential counterpart to seemingly untouchable novel written more than a half-century ago. Mersault is made not only to account for the dead Arab, given the name Musa, but also passionately called down for the familial ripple effects the murder caused. Where consequences once failed to stir, they do now.

A barebones recap is vital. Camus’ fictional Mersault is an aggressively indifferent French-Algerian who after the death of his mother, an event that causes him no grief, shoots dead the brother of his friend’s spurned Arab girlfriend Marie. He’s hot and dazed. He fires repeatedly, seemingly without purpose and later without remorse. Mersault is tried, convicted and sentenced to death. He cares little.

Daoud nimbly seizes the rebound, creating aging former bureaucrat Harun, brother of dead Musa, the incidental Arab. In the thrall of his loathed and domineering mother, and weighed down daily by the murder, Harun cares too much, not too little. He’s spent decades raging at the “famous book” while attempting to affirm his brother’s identity. He now tells his version of story to never-identified narrator, a “cunning pilgrim,” who seeks to write a book about the “case.”

So it is that Harun, once a man of “ambitionless intelligence,” is galvanized into an avenging angel, a tracker, and an enraged devotee of “writer-murderer” Mersault’s crime (“I learned to read and realized what an unjust fate had befallen my brother, who died in a book.”) Harun’s affirmation of his brother repairs a life in the manner of Greek legend, in which souls roamed unless the bodies were buried, apt because the tide swallowed Musa’s without a trace. This is fiction within fiction, the existential vacuum forced to ingest human entities and morality.

Mersault, a man of “impossible chilliness,” is transformed into literary murderer who got away far too lightly, his indifference making a mother, a brother and a sister into ghosts (“Musa was an Arab replaceable by a thousand others of his kind, or by a crow, even, or a reed…”) Mersault’s story is a “swindle” that Harun tries to set right. He has no time for God (“religion is public transportation I never use…”) but, like Mersault, he, too, has a murder on his conscience. So it is that Dauod honors Camus by delivering both the anti-Mersault and Mersault’s completion. As a result, an anonymous and once-gratuitous death acquires a life of its own.