The meaning of Jep 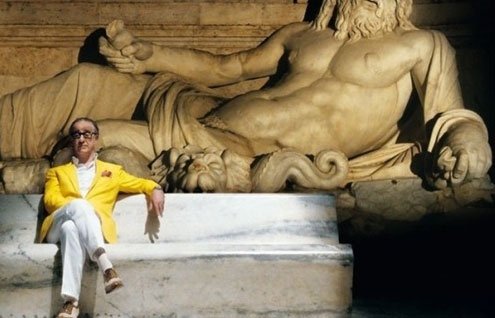 ince its debut at the Cannes film festival, Italians have been divided over director’s Paolo Sorrentino latest film, “La Grande Bellezza.” At a recent dinner I watched as opposite sides of the table debated it as passionately as the fans of Milan or Rome’s rival football teams.

Although the film opens with the death of a Japanese tourist, the focus soon turns to protagonist Jep Gambardella, who celebrates his 65th birthday in Rome. Played by Toni Servillo, Gambardella is a one-hit-wonder author whose first novel launched him in Roman society. Now, he writes for magazines, entertains guests on his beautiful terrace, and pursues his real ambition, which is “not to be invited to the best parties, but to be able to ruin them.”

Like a string of other Italians movies, including Federico Fellini’s 1960 “La Dolce Vita” and “8 1/2” and Nanni Moretti’s 1993 “Caro Diario,” the film is an episodic and apparently random walk through the life of a self-absorbed and melancholy man.

Its defenders praise its beauty, depth and rich themes. They find Servillo — who played former Prime Minister Giulio Andreotti in Sorrentino’s acclaimed “Il Divo” — masterful and touching. Its critics respond by calling it pretentious. The themes are overblown, repetitive and tired, they say, and Servillo is a facile self-parody.

I’m in the first camp, and the reason it matters is Sorrentino’s determination to make sense of modern Italy. Is it repetitive? Perhaps. At the same time, some Italian themes can’t be repeated enough, such as Rome’s estrangement from everyday Italian reality. In fact, several key undercurrents seem to have eluded Italian critics, maybe because they’re too uncomfortable to discuss.

Like Guido, the film-director protagonist of Fellini’s “8 1/2,” Jep can’t seem to get it up anymore, artistically speaking. Taunted by his earlier success, his creative impotence extends to his sexual and sentimental life. He sleeps with an icy Milanese woman, only to sneak away into ennui and general contempt. He can’t even remember one young love, who once considered him the love of her life – at least according a diary discovered by her widowed husband.

After spending a chaste night in bed with a stripper, Jep says it was “beautiful not to make love.” He revels in the trappings of success — a dandy’s wardrobe, the terrace, a social life out of Neronic times, but he’s incompiuto, an Italian word that roughly translated means unrealized or incomplete.

After Italian Unification in 1861, statesman Massimo d’Azeglio famously said: “We’ve made Italy, now we need to make Italians.” Jep’s life needs that kind of making because neither its form nor content ever really matured. Instead, he parlayed his literary talent into a colorful but vacuous party life, much the way Italy’s post-war promise turned into Silvio Berlusconi’s generalized mediocrity, or “media-cracy.”

Is Jep’s restraint with the stripper a prophecy of redemption? Maybe.

Yet a corollary issue emerges: homosexuality. In one scene, Jep follows a young man who’s eyed him in a bar. But he stops short outside the men’s room (another incompiuto). Italian critics glossed over the scene, which mirrors homosexuality in Italy: behind closed doors or not acted on.

And what about the film’s women? The only decent one, Jep’s editor and surrogate mother, is a dwarf. There’s a rapacious and pretentious young writer who transforms his best friend Romano (played by Carlo Verdone) into a pussy-whipped toy. Nuns get Botox treatments. The stripper finally dies of AIDS.

The cloistered nuns, Jep’s neighbors, fascinate him, but only as an idealized aesthetic fetish. Devout counsel? He gets that from a socialite bishop who turns out to be more interested in recipes than faith. Though Jep seeks spiritual meaning, the institutional church ironically stands in his way. You could say the same about Italy. Though Catholicism lost its status as a state religion 1984, it still predominates, with most Italians overwhelmingly calling themselves Catholics. Clerics and Catholic organizations are present at every level of Italian political life. Yet, Italians feel estranged from a faith whose role in their lives is largely ceremonial.

Artistic performance is yet another theme. There’s an artist whose pubic hair is emblazoned with a hammer and sickle. The child of a star gallery owner throws paint on a canvas during a society party. Jep’s old friend, in a swan song before returning home following a lifetime of Rome disappointments, puts on a one-man show in an almost empty theater. The first two scenes are glamorous and beautiful; the latter heartfelt and sad.

At the end, Sorrentino opens the door to conspiracy theories, and it doesn’t get more Italian than that.