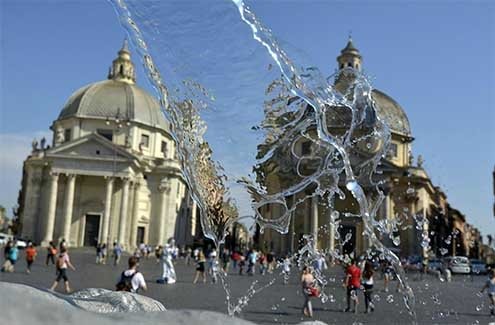 Rome is capable of lining up a 100 straight nearly identical (and rainless) summer days.
T

his is Rome’s mean season. Every day is Groundhog Day. Weeks resemble the ones just past until the torrid contagion spreads to months. It doesn’t rain during the mean season. Clouds and breezes come and go only to tease the arid land below them. It’s easy to imagine Rome as having recycled one summer and one alone since emperors’ fiddled, muddled, conquered, slaves but no running water in sight.

What’s changed in 2,000 years? Much and nothing with arid stretches in between. The latest “novelty” is air conditioning, never mind that what’s novel in Rome is ancient in the otherwise speedy West. Forty years ago Rome residents feared “conditioned” air as Cleopatra feared asps — nothing good can could from pet snakes or mangled air. But Hollywood’s dream house persistence paid off, as did affluence: now, air conditioned cars, restaurants and offices are a middle class staple (and tourist temptation). A few places resist, stubbornly holding the fort against rampant diseases of the neck and skull, but most can no longer be bothered with weight of folklore: they need customers, and both American and Asians like their inner air chilled and cubed. Even villas have been refitted to entertain the requisite if anti-Latin cooling. The repair industry thrives as a result.

But even air conditioning has a class system. In some law firms and doctors offices, only the room occupied by the septuagenarian doctor or professor is chilled. Secretaries and underlings are left to old school languor. Call it a holdover from the entitlements and denials that made imperial times imperial.

What hasn’t changed is mid-summer droughts — this year’s got started in May — and vacation time in August. A store whose items I depend on will close for three weeks starting in early August. Several Italian friends married to Londoners and New Yorkers are off to join their spouses and children already vacationing at home. One friend will leave town for five weeks, his company at home with his mean season absence and that of others. August has not and does not lend itself to industry.

True, Rome’s summer bustle is far more intense than it was half-a-century ago, when the August exodus and shutdown made the city seem vacant. Yet no other major European citizenry makes such a carefree exit, most others wedded to work as part of a life purpose. Not here.

My friend Mario, once the press spokesman for the Italian parliament, consistently bucked the exit trend. “If I leave, someone might take my poltrona.” For years I took this literally, thinking he worried that summer predators would break into his flat and steal his favorite chair or couch. So Mario held vigil even as others suntanned. Slowly learning the language I came to understand that poltrona, an armchair, was a metaphor. Mario feared August job-poachers. August was the time inside plotters went to work, or so went the tune in his conspiratorial Rome head.

When Mario did leave, he’d stuff me into his blue Alfa and head for his native Tuscany, to a tiny town called Montichiello, where every year he wrote a play that locals staged. We’d drive at 100 M.P.H., which to him wasn’t half-fast enough. There and back was the blink of an eye.

“Never let your guard down in summer,” Mario would tell me. “That’s what they want, for you to relax. That’s when bad things happen.”

He never told me who “they” were — loro — or what bad things might lie in store. Nor have worries about the “they” abated, the city’s propensity for conspiracy theories in the spirit of a seashell collector who constantly listens to the shell’s inner curves believing a message is imminent.

At least Donald Trump’s America has caught up to Rome. There’s still no emperor but the shell collectors are out in droves, listening, hoping perhaps air conditioning acquires a language, and a cause.