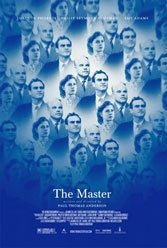 Five years after World War II a traumatized veteran named Freddy Quell (Joaquin Phoenix), half-boozer, half-dimwit, slips inadvertently into the folds of a mystic movement headed by one Lancaster Dodd (Philip Seymour Hoffman). A broken adolescent in adult guise, Freddie is adopted into a cause — and causes are potent medicine to those seeking purpose, or lacking one. This is Anderson’s neatly constructed fictional entree into L. Ron Hubbard’s postwar Scientology movement.

Like a Fascist Blackshirt, the brutish Quell gradually learns only to be loyal to “The Master,” Dodd, who promotes programmed regression so that man can get past his “dirty animal” phase, which the sexually ambiguous Dodd himself embodies. Anderson hypnotically outlines Dodd’s inner circle, coloring the details of a personality cult — “The Cause” — steeped in family values that don’t fully stick.

But Freddy is bad news, something made clear from the start as Irving Berlin’s “Get Thee Behind Me Satan” plays to his reckless antics. He’s a happy-to-please stooge perfect for a prophet who feeds on castaways.

Scientology aside, the story is about what happens when would-be visionaries get stuck in a credulous circle of applause, essentially the story of Hubbard himself. “Can’t you see he’s making this all up as he goes along,” his son tells Freddie, but Freddy can’t, or won’t, drawn like a dog in by his master’s voice, the only kind one around him.

As a period piece, this is exceptional work, with Anderson as always creating a larger-than-life character in Dodd and letting him flourish. But it’s the master’s incorrigibly war-broken pupil who stands out most, since the self-control asked of him is outside his human reach, and chafes at his willfulness. Freddie is the “everyman” veteran whose trauma is too deep to fix.

At the same time, Anderson is also interested in the struggle between dominance and individuality, non-conformity and persecution, with cult-master Dodd serving as both demon and outcast, and Freddie the fulfillment of his view of mankind as feral and in need and healing indoctrination. If only it worked.

Hollywood mostly doesn’t get around to this kind of ambition, but Anderson has thankfully mastered the star system, and imposes his skilled will on two of the finest actors of their generation, to imperfect but intriguing results.