The Masque of Africa: Glimpses of African Belief 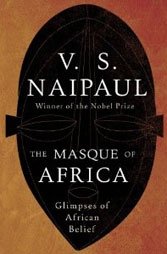 V.S. Naipaul, the 2001 Nobel Prize winner for Literature, has returned as a travel writer. This time in Africa. His book is a brilliant reminder that the Nobel Committee awarded Naipaul his prize for lifetime of works “that compel us to see the presence of suppressed histories.”

Naipaul’s nearly 30 works of fiction and non-fiction have made him a global name for decades. But even at 78 he still writes with the graphic, freshly attentive curiosity of youth. His hallmark innocent-narrator manages to be both highly entertaining, and deeply subversive of standard socio-politico “correctness.”

In “Masque” he treks the vast, variegated African continent, traveling with a constant, perplexing question about the nature of African belief. He moves through ancient forests, to isolated religious shrines, and rubble-strewn cities. His route starts at continent center, in Uganda. On to Ghana, Nigeria, the Ivory Coast, Gabon, and, finally, South Africa

Throughout, he asks: how did two centuries of imported — or simply imposed — belief systems alter the face of historic African culture?

In answer, he slips off the postcolonial masque of modernism shared by Africa’s wildly diverse countries. To find the underlying, common heartbeat. In long, open-end talks with political leaders, tribal and spiritual chiefs, clan rulers, and witchdoctors, he encounters the old masques of rite and ritual. The still fiercely beating pulse of traditional Africa. Rooted in magic spells, totems and fearful taboos.

For during their two centuries of war and colonizing… invaders, slave traders, missionaries, commercial interests, and self-invented battling politicians forced native Africa to their own belief systems. Time and again Naipaul discovers the result: a violent cultural clash and confusion. It marks the 21st century continent “like an applied and contagious illness.” This is a fine, intensely human voyage.