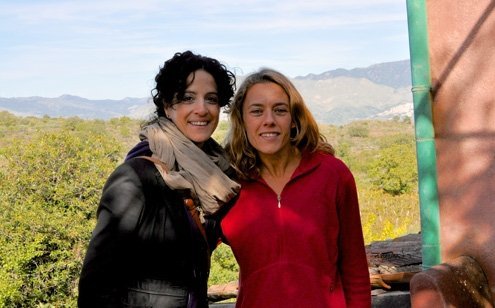 The author and Anna Martens at the Vino di Anna winery on Mount Etna.
A

bout the time Anna Martens decided she didn’t want to be wearing a lab coat for life, guess what she had on? She’d always liked science and was on her way to a degree in microbiology and immunology at Adelaide University. But she also loved wine. In her free time, she’d visit vineyards and attend cellar door sales in the Barossa Valley, Adelaide Hills and McLaren Vale.

So she transformed herself. Martens veered away from one form of science to another, shifting her university studies from microbiology to oenology. After her degree, she got a job at the Petaluma Winery, in the Adelaide Hills. After which came the travel bug. She participated in harvests in France, South Africa, Argentina and Italy.

In 2001, she joined the winemaking team at Tuscany’s Tenuta dell’Ornellaia. Four years later she traveled south to Sicily’s Mount Etna, intrigued by what volcanic soil might yield. She then worked for the Passopisciaro Vineyard near Catania. In 2010, she and her husband Eric Nairoo founded Vino di Anna on the Etna slopes. Husband and wife dedicated themselves to making only natural wines.

I had a chance to chat with Anna recently. These are highlights of our conversation.

Consumers are often confused by what “natural wine” is. How do you define them? It’s an overused term. Let’s put it this way: Wine should be a natural thing, with no help from chemicals. Wine comes from grapes. Its creation is a natural process. It’s human beings who have interfered. They’ve told themselves they need to add treatment processes and chemicals. Since World War II, these processes have become the norm.

Natural means being hands off in the winery. It means using indigenous yeasts. The idea is to guide your wine into the bottle in its most natural state. Your focus is on the health of your grapes and soil. “Natural” doesn’t mean good wine. There are a lot of faulty wines out there. It’s about understanding soil and seasons without the use of chemicals or additives in vineyard or cellar.

When did you first taste natural wine? My husband Eric introduced me to them. Some 30 years ago he decided to find natural wines to sell. Remember that time natural wines were hard to find. We spent a lot of time traveling through France — Jura, Loire and Burgundy — visiting tiny estates and tasting many natural wines. This introduced me to a different way of making wine than I knew. It seemed to me extreme wine making, compared to the kind of control I’d had at Petaluma. Up to that point, I’d had conventional wine making jobs. Here, winemakers were allowing grapes to ferment by themselves exposed to oxygen, which is the opposite of industry standards.

What brought you to Italy? I first visited Europe in 1997 for a harvest in Burgundy. I then traveled from north Italy to Tuscany, seeing the classic wine regions. I knew that I needed to spend time in Europe. If you haven’t really spent time in the wine countries you’ve read about and studied, how can you know the nuances?

My real adventure began in 2001. I harvested in Argentina, traveled around South America and then decided to go to Italy and work a harvest job on the Tuscan coastline at Tenuta dell’Ornellaia in Bolgheri. Italy was amazing and I was hooked. I got a full time job and stayed for four years.

That brings us to 2005. Around that time Eric and I went to Mount Etna to look for some wines for him to import to England. We both loved the terraces, the old vines, the challenging climate and the local grapes — Nerello Mascalese and Carricante. We had tasted old vintages of Calabretta and Benanti. We loved the high acidity, the fine tannins of the reds and the breathtaking countryside.

At that point, 11 years ago, Etna was reasonably priced. We thought, “Let’s talk about making wine here together.” And the idea was born. It’s a complex region for viticulture so my idea was to work with someone to see if down the line it might be feasible to create our own wine. We wanted to see if we truly loved Nerello Mascalese. I was lucky enough to land with Andrea Franchetti at his Passopisciaro wine estate.

How did it go? Working for Andrea Franchetti was a great experience. I loved doing the physical work again of harvest, dragging pumps, moving hoses after being in a more managerial role.

How was Vino di Anna born? My first harvest for Andrea was in 2007. After that I had itchy fingers to find some grapes of my own. In 2008 I purchased two parcels of fruit from friends and made wine in a plastic tub in the corner of Andrea’s winery. We bought some old barrels and threw the wine into them. The name “Vino di Anna” came about in a funny way. It was part of a joke between the guys in the cellar, Eric and I. I used indigenous yeasts, no sulfites, wine made naturally. The boys in the cellar labeled my wine “aceto di Anna” (Anna’s vinegar) without telling me. They were waiting for me to discover the label. It was only when a journalist stopped in and inquired about my vinegar that I saw the label. Both barrels were turned into Vino di Anna and the name stuck.

How many bottles did you make in the first year? In 2008, we made 600, in 2009 a bit more. We were expecting our first child so I stopped working for Andrea. Eric and I started looking for a vineyard of our own. It evolved quickly. We bought two parcels of old vine Nerello Mascalese and rented a house opposite the vineyard. In 2010 we made the wines in a local coop but we really wanted our own place. In 2011, we bought an old winery and started renovating it. The first Vino di Anna wine made in our place with our grapes was 2011.

How has Vino di Anna evolved since then? Each year we’ve acquired more vineyards. We’ve also met people from whom we can lease their vineyards and work them the way we want. We are experimenting fermenting Nerello Mascalese in plastic, wood and in stainless steel. In 2011, Eric went to Georgia in the Caucuses and received a Qvervi as a gift. It’s a traditional clay Amphora-like vessel used for fermentation and maturation. It’s usually buried in the ground up to its neck and sealed enabling the winemaker to do extended macerations on the skin. [editor’s note: “maceration” is when you steep a solid, skins, seeds and stems, in liquids to soften them and extract compounds.] Each year, as we understand our vineyards and grapes better we choose different ways to manipulate the grapes and put them somewhere to ferment. Then we wait and see what happens.

Have you achieved what you set out to do? We had no one no plan. The first year we produced 800 bottles. It’s evolved each year as we’ve evolved as a couple and a family. We’re only at the start of our journey. We’re growing slowly but organically.

Would you limit production? Yes. While it’s exciting because we’re doing the growing, we’re also working in the vineyard — pruning, the harvest, emptying qvevris, bottling, labeling. We need to be reasonable. You also have to sell the wines. In the end, we want to own our vineyards, not lease them. We may end up at 50,000 bottles, evaluating as we evolve.

Do you have a favorite among your wines, one that might stand for your style of winemaking? I’d name three. Palmento is a field blend of red and white local grapes grown at 700 meters [editor’s note: a field blend refers to grape varieties grown, harvested, crushed, and co-fermented]. It’s a contadino, or peasant, wine fermented in our 250-year-old Palmento building and meant to be table wine. Ideally it goes in a liter bottle, possibly chilled. There’s Vino di Anna Rosso. It comes from century-old Monte La Guardia vines. It’s pure austere wine with lovely fine tannins. Vino di Anna Rosso “Qvevri” is a good example of hand’s off wine. The wine is made in qvevri — those enormous clay vessels. The idea is to get an energy exchange between the earth and the qvevri.