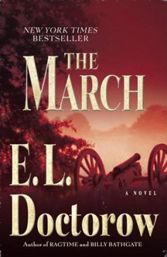 A pragmatist, General William Tecumseh Sherman notoriously declared that “war is hell” and did his utmost to make it so. This Civil War saga begins when Sherman’s army descends on Georgia destroying cities, factories, railroads, homes, and plantations. As terrorized landowners flee to join the Confederacy, their families and slaves survive by latching onto his forty-mile convoy. Doctorow follows the stories of the refugees: Mattie, a widow addled by grief searching for the corpses of her teenage sons; Emily, a displaced patrician who takes up nursing; and Pearl, a half-breed, young and white-skinned enough to disguise herself as a Yankee drummer boy.

The impersonal cruelty of war masks and unmasks those it ensnares. Doctorow’s beautiful but harrowing award-winning novel explores the themes of freedom and strife as it recreates the grim reality of warfare.