The mangling of Medusa 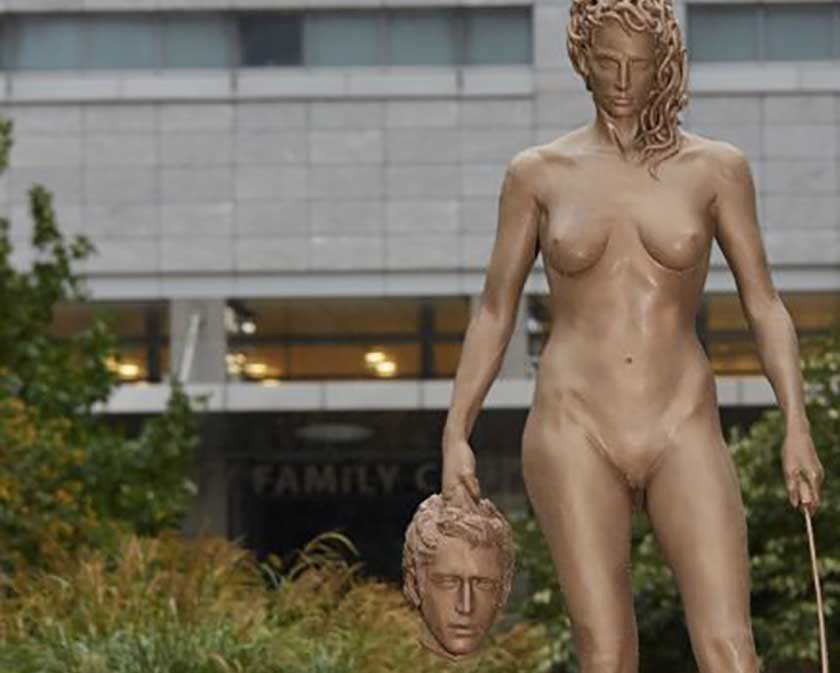 hen the bronze statue of a fierce, snake-haired, naked woman armed with a sword and holding the freshly decapitated head of a man appeared in Lower Manhattan, in October 2020, the public was immediately riveted. New Yorkers are, of course, accustomed to the most eclectic art displays. Performances sprout up throughout the city on a daily basis. But the representation of this Medusa, the snake-haired monster from Ancient Greece mythology, the head of warrior Perseus in hand, was charged with significance.

The seven-foot statue is the work of Italo-Argentine artist Luciano Garbati, and was positioned in Collect Pond Park, just outside the New York County’s criminal court building. This is where disgraced Hollywood producer Harvey Weinstein was tried, convicted, and sentenced on many counts of rape and sexual assault.

The piece represents a paradigm shift in the mythological account of the monstrous Medusa, whose gaze turned anyone who looked at her to stone. Perseus, a mighty fighter, is entrusted with the task of putting an end to the chaos and restoring order by slaying Medusa. He does this by beheading her — a narrative turned upside down by Garbati’s sculpture. In his vision, Medusa beheads her adversary.

The statue was not purportedly created to specifically support the movement against rape and sexual harassment, which acquired international notoriety under the #MeToo hashtag.  Garbati actually made the original sculpture in 2008 using clay. But in 2018 an image of it the artist had uploaded to Facebook became a #MeToo meme. New York artist Bek Andersen got in touch with Garbati and the two collaborated to create the bronze sculpture displayed in Lower Manhattan.

The problem with Garbati’s paradigm switch is that it does little more than turn the outcome of the contest upside down.

The statue elicited attention but just as much criticism. Even within the #MeToo movement it is both praised and deplored. Some feminist activists harshly criticized its aesthetics. Using the convention of a beautiful and naked female body — one created by a male artist — to underscore the crime of rape leaves them sceptical. That the Medusa’s pubic hair is depilated didn’t help. In fact, that triggered a number of hilarious comments on Twitter speculating on how that part of the body would have looked had it not been epilated. More snakes?

None of the above troubles me in the least. The harmony of a naked body, male or female, was a recurrent theme in the aesthetics of Ancient Greek sculpture, the cultural milieu this reflects and builds upon. Hair removal, on the other hand, has been practiced for millennia in a number of cultures, including Ancient Greece, so it can hardly be identified as an element of contemporary beauty canons, as many seem to believe. The aesthetics of Ancient Greek sculpture tended to emphasize the Platonic concept of kalokagathia, namely a harmonious combination of physical beauty and moral values. Of course, in the contemporary world, the notion that external beauty mirrors moral values is upsetting. And I very much understand the vantage point of those activists who criticize the use of these aesthetics to support a cause against the objectification of the female body. But it could be argued that the artist is merely adopting and adapting a long-established mythological and philosophical reality. By rewriting the story, his challenge to the canon came not from the point of view of aesthetic criteria, but from that of the mythological paradigm.

Garbati’s Medusa, by winning, reverses previous artistic renditions, including Benvenuto Cellini’s “Perseus with the Head of Medusa,” a masterpiece of Italian Mannerism, a late Renaissance style. Cellini’s sculpture can be found in Piazza della Signoria, in Florence. During his childhood, Garbati lived in a town near Florence, so he must have been quite well-acquainted with the treasure he would one day challenge.

The problem with Garbati’s paradigm switch is that it does little more than turn the outcome of the contest upside down.

In his version of the myth, the murdered Medusa becomes a murderer, and that’s it. He ignores or bypasses the myth (and morality tale) behind the scene he’s representing. The story of how Medusa became a monster is in fact far more complicated than renditions of the final fight suggest.

Myths usually have a variety of versions and Medusa’s story is no exception. Cellini’s and Garbati’s pieces refer to a specific part of Ovid’s “Metamorphoses.”

In Ovid’s version of the story the beautiful maiden Medusa is a priestess at the temple of the goddess Athena. She is supposed to remain a virgin for the length of her priesthood, but Poseidon, the god of the sea, rapes her at Athena’s temple.

The inclusion of Athena, a woman responsible for Medusa’s suffering, would have given a very different tone to the piece.

There is some debate among scholars regarding Ovid’s use of the verbal form vitiasse, from the Latin verb vitio, which may or may not translate into rape. But given Medusa’s role as a priestess it can be assumed that it would had been unlikely for her to engage in consensual sex with Poseidon at Athena’s temple.

When Athena discovers that her temple has been desecrated she turns her rage to Medusa, transforming her locks into a mass of venomous snakes and turning her skin to a greenish shade. Worse still, Medusa’s eyes are cursed so that anyone who looks into her eyes turns instantly to stone. Cast away as a monster, she becomes a plague on the community, and this is the context in which Perseus is given his mandate.

My main objection to Garbati’s piece is that it openly ignores the myth by providing a shallow overturn of the killing scene. If the aim of the artist was to provide poor Medusa with a revenge of sorts, he sadly missed or set aside the obvious point that it is Poseidon’s head Medusa should be holding. And Athena’s. And then perhaps, only well in third place, that of Perseus.

Undoubtedly, such a variation would have posed a number of additional challenges to the artist, both aesthetically and symbolically. And of course, the active involvement of Athena, a female figure, as one among those responsible for Medusa’s suffering would have given a very different tone to the piece. The very simplistic goal of discrediting a male predator, or his victims. Such a pity. Medusa portrayed as carrying the heads of her three tormentors would have been far more effective, both as a broad reinterpretation of the myth and as symbol in support of the #MeToo movement.

— This is the second of a ­series of columns on subject concerning facets of ancient history.