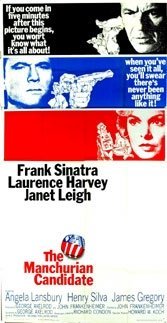 Italian has a beautiful word for the mood of the somber: cupo. It’s the not-quite-darkness of things. Director John Frankenheimer managed a fistful of it in what might be the best post-McCarthy Era American political thriller ever made. Korean War POWs are hypnotized by the nefarious Chinese — then known as the Red Chinese — and transformed into walking sleeper cells, literal ones.

Two among the brainwashed, Raymond Shaw (Laurence Harvey) and Bennett Marco (Frank Sinatra), are dispatched back into American society, where each one will have a role. Shaw is the focus, a decorated automaton geared to penetrate politics — his mother is a Republic party benefactor — and kill on command. Marco is the more troubled of the two, since he vaguely remembers that something went terribly wrong while he was captured. Just when he begins to get a nightmarish grip on what might have happened, he meets and is seduced by a sultry woman (Janet Leigh) on a train. Who’s controlling who, and to what end?

There’s a climax to this increasingly tense spiral, but it matters less than all the beautiful murk in the middle, which includes astoundingly fine work from Harvey, Sinatra, and above all Lansbury, who adds her own layer of brainwashing to Raymond Shaw’s already terrible muddle. Frankenheimer rightly sensed that Richard Condon’s Cold War novel was about susceptibility, vulnerability, demagoguery, and how people can be tricked into being what they’re not, whether by a foreign government, a parent, or the three-ring-circus that is politics.

He played off paranoia and political cynicism in a way that few others ever have, introducing presidential assassination and conspiracy into the mix of 1960s moviemaking a year before John F. Kennedy went down. The film (once picketed by those who saw it as pro-Communist) was pulled after the JFK killing, allegedly at Sinatra’s behest, but in truth because it performed poorly at the box office.