The Man Who Wasn’t There 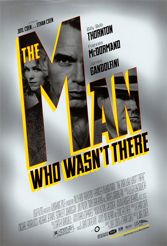 Bill Bob Thornton is energized by alienation. Joel and Ethan Coen use him exceptionally well in this story of small-town barber Ed Crane who’s in over his head just by being alive. Ed tells his life story from death row, introducing the brink early on. That doesn’t mar the recounting, which moves from accident to desperateness to folly. It’s California in 1949, the peak of the postwar doldrums. Ed, who has a war-scarred demeanor, wants to improve his station but lacks both the vocabulary and the social skills. He invests in a dry cleaning business, and when that misfires the abyss opens wide.

This takes the cop/noir genre and applies it to the misfortunes of an odd species of everyman. Frances McDormand is typically strong as Ed’s cheating wife Doris, young Scarlett Johansson has an quirky turn as a pianist Ed is obsessed with, and Coen favorite John Polito is perfectly typecast as a peddler for the wonders of dry cleaning. Most intriguing (with a Semitic subtext) is Tony Shaloub in the role of a fast-talking Sacramento lawyer named Freddy Riedenschneider. This is as un-American an American film as you’ll find, and well worth it’s weight in Coen-specific style.