The man who wasn’t there 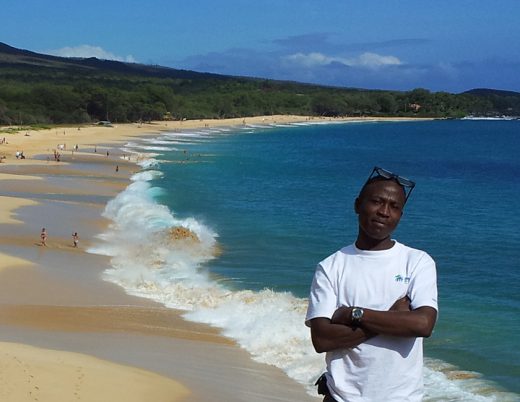 Emmanuel Mbasha at what became his favorite spot on Maui, mile-long Makena Beach, of which he said: "This, my friend, is God's work!"
E

mmanuel Mbasha was a proud member of the Chagga tribe and came from the Machame district of Tanzania, at the foot of Mount Kilimanjaro. The last son among 11 children, Emmanuel was 25 when I met him six years ago, and 29 when he was killed. The lesson of his life is how difficult it is to alter the world in which you live, and the price you often pay for your effort.

We first got to know each other via email, thanks to an unlikely and convoluted chain of events best summarized by the line “my friend has a friend who knows your friend.” Later, he would come from East Africa to visit me in Hawaii, where I live.

Though change, in the form of cars, roads and buildings had come to Machame’s main city – Moshitown – Emmanuel’s village, where he lived with his 75-year-old mother, his siblings gone, still offered few amenities.

It often took him days to respond to my early emails, which he sent from a coffee shop miles from his home. It charged the equivalent of one dollar for web access, an amount Emmanuel sometimes could not afford.

Whip smart, Emmanuel learned English quickly, earning a guide license (a rare accomplishment) and becoming a driver. Consistent, decent paying work in Machame is still hard to come by in spite of the flood of tourists seeking a quick trip up Africa’s highest mountain, Kilimanjaro, which sat in his backyard. Emmanuel counted his blessings.

In his last email to me, Emmanuel wrote, “Men are angry. I fear bad things.”

I don’t know what spurred Emmanuel’s interest in women’s rights, but he became a champion in his village, and was threatened as a result.

His sister Simbuandee escaped her husband with her daughter. Both were badly beaten. Emmanuel protected them, which was not the village way: husbands have “rights.” His sister made a meager living sewing, and one night her husband stole her manual sewing machine (there was no electricity) and burned down her single room hut. Emmanuel arranged to hide both of them, and several of us bought her a new machine.

But the problems did not end there.

An elder brother chose to remove his youngest daughter Zawadi from the English school to which she’d earned a partial scholarship because he’d decided to sell her as a third bride. Emmanuel snuck her away, and some of us paid her tuition.

After two years of emails and scratchy phone calls, I arranged for Emmanuel to travel to Maui so we could finally meet face-to face. He arrived just before America’s disdain for immigration exploded into paranoia. Yet the hurdles we needed to surmount just to get him to the United States were daunting, and at times frightening. After landing in Los Angeles, he endured a six-hour customs grilling before finally being admitted.

He spent three weeks on Maui. Many were the dinners in his honor graciously hosted by my friends. He talked to school groups about his life and village. He hiked with students, and showed them some of the similarities and differences between his African environment and that of Hawaii. He had a ball.

Foolishly, I failed to fully understand how much coming to America would affect him. One morning, in a pinch for time, I brought him to Denny’s restaurant for breakfast. I told him to order the lumberjack special and when it arrived he sat there looking at me.

The food on his plate was more than he sometimes ate in a week.

Emmanuel presented the mayor of Maui with a village chief staff, and the mayor reciprocated with a Maile lei, given to leaders and people of importance. “This is the best day of my life,” Emmanuel said.

While Tanzania — a British colony until 1961 — abuts the Indian Ocean, Emmanuel had never seen it. Maui has 83 beaches, and some days I felt bad that I had to pry him out of the warm Pacific Ocean for an appointment. His smile as big waves pummeled him was something to behold.

He met with business owners and executive directors, most of whom were, by design, women. Emmanuel’s family situation wasn’t unusual. Women in Tanzania often have a brutal life. “It is the old way,” Emmanuel said to me. “We must change our old ways.” Speaking to women in positions of authority was a revelation to him, and he left each meeting with brows furrowed, deep in thought.

Emmanuel presents his sister Simbuandee with her new used manual sewing machine, with samples of her work in the background.

Emmanuel was in awe when we visited Costco. He had never seen so much food, clothing, and goods in one place. He snapped picture after picture, his head shaking. We bought him a Hawaiian shirt, which he wore proudly.

I last saw him after he passed through security at Maui airport. He turned to wave, and I saw him crying. How difficult it must have been to experience abundance beyond his imagination, only to know he was going home to a life not so much of poverty, but a life without.

He returned a hero. Village chiefs begged him for stories. A cottage industry sprang up: men about to marry asked to wear his Hawaiian shirt for good luck. Wearing it meant they too would one day visit America. “I have not worn my shirt in a month!” he emailed me. He did plan to wear it himself, since he was engaged to a woman pregnant with his child. “She will be my only wife,” he told me.

Then, everything changed. Machame is a great coffee growing district, and for decades a German company owned a plantation north of Emmanuel’s village. Both village and plantation existed harmoniously. After Emanuel’s return, an American company bought the plantation. It dammed the one stream that flowed south to the village, stopping the only water Emmanuel’s people had to sustain livestock and crops.

Now a world traveler who spoke Bantu, Swahili, and English, Emmanuel was respected as a leader, and brought a delegation to the plantation to explain their problem. The American company insisted it had the right to do what it wished with its water, and had the delegation forcibly removed.

In his last email to me, Emmanuel wrote, “Men are angry. I fear bad things.”

His sister made a meager living sewing, and one night her husband stole her manual sewing machine.

Though Emmanuel counseled against it, village men armed themselves with machetes and at night destroyed the wooden dam. The company rebuilt it, and hired armed guards. With crops withering and livestock dying, the village again attacked, and this time it was a mêlée. Several people died. Emmanuel’s brother had his left arm hacked off.

I still do not know what happened to Emmanuel. I contacted a Kenyan beekeeper I knew, Sam, who traveled between Kenya and Tanzania often and knew Emmanuel. According to one account, Emmanuel was attacked and killed by machete-wielding assailants. Another version suggested he died from infected wounds.

A year later I flew to Tanzania and traveled to Arusha and Moshitown. People knew the Mbashas, but no one could tell me where they had gone. Emmanuel’s pregnant fiancé would now be shunned by men, who might only marry her if she got rid of the baby. I could not imagine the life she faced alone. I sought out Emmanuel’s niece. Without his protection, she had been pulled from school. I left clueless and empty-handed. Everyone had gone. The stream was dry.

Emmanuel was a man people met and never forgot. His sense of humor matched his smile. His kindness matched his heart, big and effusive.

Had I not arranged for his trip, I wonder now, would he not have become a leader, and be alive today?

Good intentions can result in bad outcomes. I haven’t learned how to predict them. I keep hoping my travels will teach me.