The man who got away 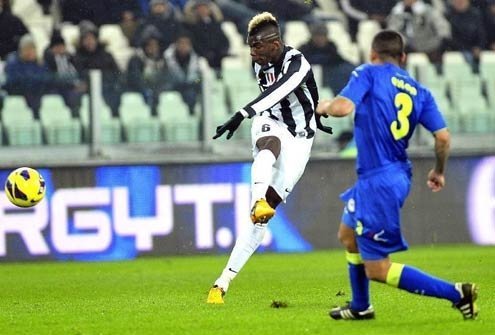 s Paul Pogba struck twice from outside the box in Juventus’ 4-0 victory over Udinese, it was hard to imagine any Manchester United fan not wondering why the 19-year-old, among Europe’s most talented rising stars, wasn’t still on the books at Old Trafford.

Pogba, a Frenchman of Guinean descent, was reportedly unhappy with United’s refusal to meet his wage demands and joined Juventus last summer with no transfer fee attached.

The American Glazer family, which owns the club, is determined to maintain salaries at no higher than 50 percent of turnover. Pogba balked, leading United manager Sir Alex Ferguson to complain about his lack of respect.

Financial arguments aside, United lost the services of a player it knew possessed the hallmarks of a future star. Pogba was described by the club’s official website as “powerful, skilful, and creative” with “stamina, vision to pick out key passes, an eye for goal and a penchant for the spectacular.”

Given the wealth of talent in Juventus’ midfield, many, myself included, expected Pogba would have to wait at least a season before making his mark for the Italian giants. After all, the reigning Serie A champions boast the likes of Andrea Pirlo, Claudio Marchisio and Arturo Vidal in midfield.

But against Udinese, with Pirlo, Marchisio and Simone Pepe out, Pogba got his chance. He partnered Vidal, the Chilean powerhouse, creating a dynamic central midfield that took their in-form adversary by storm.

So far, Pogba has lived up to his billing as a powerful box-to-box midfielder. Juventus manager Antonio Conte has a reputation for demanding an intense on-field work ethic. His midfielders are expected to show a determination to get back and protect the back four, while making forward forays and sending penetrating passes to link up with the forwards. In that sense Pogba and Juventus are in many ways a perfect match. His venomous long-range strikes against Udinese increased his tally to four goals in 13 Juventus appearances.

With serious injuries to Phil Jones, Tom Cleverley, Anderson and Darren Fletcher, Pogba might have been expected to play a larger role at United last season. Instead, he made only seven appearances in all competitions, all as a substitute.

Sir Alex presumably considered the teenager too young for a regular run in a side locked in a battle with fierce rivals Manchester City for the Premier League title, a battle the Scot preferred to be led by experienced heads such as Ryan Giggs and Paul Scholes.

On recent form, Pogba would surely have been a major asset for United, especially given the limitations (and injury records) of the current crop of Old Trafford midfielders.

Fletcher’s chronic bowel disease has knocked him out indefinitely, while Anderson, a strong box-to-box midfielder like Pogba, is also still hurt. Jones looks a promising player when fit, but he appears to have more appetite for defending than getting forward. That leaves Cleverley, but he seems less comfortable when having to defend, lacking Pogba’s box-to-box physical strength.

Some have compared Pogba’s departure to that of Spanish defender Gerard Piqué, who was sold to Barcelona in 2008 for £5 million after four years at Old Trafford and has since established himself as one of the greatest center backs in world football for club and country.

In hindsight, the Piqué sale was a mistake. He would undoubtedly have strengthened a United defense that has never shown the same solidity since Rio Ferdinand (2010) and Nemanja Vidic (2011) were hit with serious injuries.

At least the Piqué deal came when the former England captain and uncompromising Serbian international were at the pinnacle of their respective careers.

The same can’t be said about United’s current midfield, where Pogba was surely destined for a starting berth sooner rather than later. All the more so now, based on the impact he’s had on what must surely be considered a more competitive group of central men at Juventus.

United, whose website last year insisted it would be “a disappointment, and a surprise, if [Pogba] is unable to force himself into the first-team squad on a regular basis,” must now be ruing the man who got away.