The man who eats goats 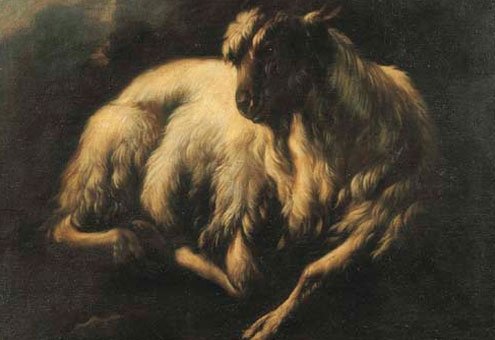 t took some time, but after frequenting Rome’s Mercato Trionfale for almost a year, I have finally found a reliable butcher. The sheer number of vendors and the relative infrequency of my meat-purchasing visits prolonged the process.

Meat in Italy tends to be expensive. Cuts of chianina, the beef used for the famous bistecca alla fiorentina, run close to €30 a kilo. Having a butcher you trust opens a few doors.

About a month ago he recommended a cut of pork that was a cross between wild boar and domesticated pig. It was tender enough to pan-fry but had an added Umbrian wildness. A few weeks ago sold me discounted flank steaks that a restaurant hadn’t picked up. This week it was quarti di capra, goat quarters.

I picked what looked like the rear leg, rump, and little bit of rib, which he aggressively chopped into about 3 centimeter cubes. What to do with it? He had no doubt: Cook it with a tomato sauce and serve it with gnocchi.

I picked up some potatoes on my way out of the market, ready to follow up on his plan. But walking home under the hot summer sun made me think twice about a meal of heavy gnocchi with rich tomato sauce.

I decided to improvise to come up with something lighter and more season-appropriate.

My best experience with tougher meats is beef bourguignon, where slow cooking with a lot of red wine softens it up nicely. Since I had goat, which is much leaner than beef, and it was summer, I opted for white wine as an alternative.

I started by browning the chunks of goat with plenty of salt and pepper. The smell was deliciously gamey, more along the lines of venison than beef. Once they were browned I took them off the pan, leaving the juices behind, and transferred them to an oven pan. I tried a little slice at this point and while the taste was great, the meat remained tough.

In the same pan in which I’d cooked the goat I softened onion, carrot and celery, which I then added to the oven pan and the waiting goat chunks. These were covered with a full bottle of dry white wine, sprinkled with parsley and complemented with a few laurel leaves.

Flying somewhat blind at this point, I decided 180˚C (350˚F) seemed like a low enough temperature to cook with for a few hours. At the hour mark I did a little taste test: the meat was still tough and the wine hadn’t even started evaporating, so I upped the thermometer to 200˚C (390˚F).

Another hour later and the meat was busy falling off the bone, but still needed more time. The three-hour mark was just perfect: little wine left, nicely thickened into a sauce, and meat that crumbled at the touch of a fork.