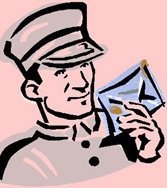 The "man mail" delivers your letters.
I

am losing my vocabulary. Nouns are slipping away quickest. Last week it was blackboard. Lavagna or tabella in Italian have nothing that remind me of either “black” or “board” and I couldn’t scrape the word together. It was a compound word, but what?

My Italian husband Germano gets English compound words backwards. You take a “bus school” to class, pick up “springs box” for your bed, and the “man mail” delivers your letters. Not to mention that the “dogcatcher” is the “catcher dog.” Maybe if I’d thought “board black” I could have fished “blackboard” from my memory.

I tried to explain to my father that workers painting the exterior of our apartment complex had painted over our awnings.

I think I told him that the workers painted our curtains.

What, he wanted to know, were the workers doing inside our apartment?

I end up describing nouns in long sentences. “You know, the tende, not the curtains but the rigid things that pull out from the ceiling and protect you from the sun on the terrace.”

Today at lunch I ordered “shrimps” in my pasta. Aren’t they shrimp, a co-worker asked? You know one of those words that is singular in the plural.. deer, fish, shrimp. Ah, yes.

Yesterday, while giving a speech to fresh-eyed American college graduates about “Living in Rome” I couldn’t remember the word “deferred.”

I babbled into the microphone. Had I “postponed” or “held off” my entrance to the masters program? The microphone seemed to reverberate my question to the corners of the room.

“Deferred,” a few students in the front row kindly prompted.

At the evening farewell party for Americans studying in Europe, I felt equally out of place. I circled near people I assumed were my age — the American men standing in suits and graying sideburns — and felt as stiff as if I were inappropriately dressed for a business meeting.

A bearded man leaned over me asking, “So, are you generation X, Y, or Z?” I’d heard of “X” but not the others. Romans don’t seem to label their generations by letters — different ages socialized freely over dinner or at the bars.

I then mingled with the students on the dance floor, yelling “Whoo-hoo” and waving my hands in the air when the DJ played MC Hammer. The student Lisa nudged me incredulously, “MC Hammer is pulling you out to the dance floor?”

He’d been hip when I was in college, but the American music world, like the language world, had moved on. “You are definitely the oldest living person to still use the word ‘Dudette,'” my younger sister had told me shaking her head, over Christmas.

I sauntered to the disco’s bar, a safe haven, with confidence I didn’t feel, greeting Brett along the way, a too-cool-for-school American studying in Italy. “It’s BreTT, not Bread, like pane, the way the Italians pronounce it. You’ve been here way too long,” he reproached.

At the end of the evening, I joined the line of students retrieving jackets at the coat check and unlocked my moped before putting on my silver helmet and winding through the illuminated streets of Rome back to my apartment, the one with the outside “curtains” painted white, and thought about what I would have said had I found the words.