The Man in the Grey Flannel Suit 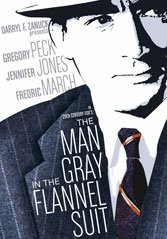 Director Nunnally Johnson’s ponderous but poignant adaptation of Sloan Wilson’s 1955 novel is a attentive examination of 1950s life as well as a useful preview of themes that would soon come to dominate American cultural life, including work-related stress, rat-race values, TV violence, the fragility of marriage, and the hidden but scarring trauma war can leave on honorable but bottled up veterans.

Gregory Peck, in top form, is Tommy Rath, a cash-strapped professional with a wife and three children trying to make ends meet in the newly competitive postwar period. He lives in Connecticut and commutes to New York. His wife Betsy (Jennifer Jones) wants him to earn more and “fight for something again,” which she senses he’s stopped doing since the end war’s. That’s mostly because the war, for polite, “citizen soldier” Tommy, an infantry captain, the war was a vivid tapestry of trauma and secrets that he’s has bottled up, and which Johnson covers in overly long flashbacks.

When Tommy gets a chance to work in a PR firm, he’s suddenly forced to cope with a work world in which insincerity and jadedness are the norm. But there’s no “Leave it to Beaver” innocence at work here. Poised Tommy’s struggle with wartime demons — he served both in Europe and the Pacific — is constant, and there’s a melancholy side to his character.

He wants to tow the Madison Avenue line but finds himself uncomfortable in a clearly cynical workplace. “For a decent man,” says Betsy, “there’s no piece of mind without honesty.” But both honesty and candor, as measures of self-worth, come with adult costs, and Tommy’s passage to a better understanding of personal purpose means being willing to pay that price. This is without doubt an American family values film — but it’s also a measured and mature examination of a society of frayed people who struggle with honesty and whose lives are less tidy than they seem. It is where such work as TV’s “Mad Men” got its propulsion.

Fredric March is superb as a boss rues mistaken choices while maintaining his dignity, with Lee J. Cobb as a country judge who character exists to exalt a kind of rural candor the city has swallowed alive. As a film about adult flaws, and their potential consequences, it packs more of a punch than dramatic equivalents today.