The Making of the Zombie Wars 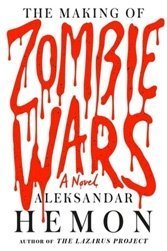 That said, behold dandruff-addled Joshua, Josh or Jonjo, a 33-year-old wannabe screenwriter with an “archipelago of zits” who, we learn, loves Baruch Spinoza, is son to a dysfunctional Jewish Chicago family, teaches English to immigrants, and is boyfriend to a Japanese-American Kimmy, lover of order, handcuffs and her cat Bushy. Josh is encumbered by two principle “comic” dilemmas: advancing his hackneyed zombie script (parts of which annotate, or syncopate, the narrative) and maintaining control over his screwball daily life, prominently populated by landlord Stagger, a madcap Gulf War veteran (borrowed wholesale from John Goodman’s Walter Sobchak in “The Big Lebowski.”) When Josh falls for Bosnian Ana, a married mother of a Bosnian war veteran, he tumbles headlong into the tragicomic Chicago Balkan netherworld Hemon memorized after moving from Sarajevo in the 1990s (the story is set during the Iraq invasion of 2003). For protected Josh, this is a “brutally authentic domain.”

But neither Joshua’s reams of hedonistic slapstick — he craves to “pursue pleasure unreasonably, beyond the right and wrong…” — nor the Balkan lunacy around him are droll enough to make the story much more than the sum of its many caricatures and gags, including the malevolent zombies (including legions of undead immigrants) Josh is trying to animate.

Hemon can be funny (“Brunch was an abominably monstrous compound nound…”) and works hard to check any number of loony-tunes boxes. Americans are strange; Chicago Jews, particularly the self-loathing ones, even stranger (and prostate-obsessed). Bosnians, particularly Chicago Bosnians displaced by the war, are a barrel of violent mispronunciations. American vets are total lunatics, with Stagger, Samurai sword in hand, trying to slash all around him. As for Kimmy’s cat Bushy (think George W.), you know he can’t possibly survive Hemon’s uproar. In fact, not even the novel survives Hemon, whose amusements are less contagious than dulling — unless you’re in the mood to relive industrial quantities of sardonic disdain for the Iraq misadventure, a metaphor for American chaos. This is trifling work from a fine author who’s probably better off sparing satire.