The making of the unreasonable actor 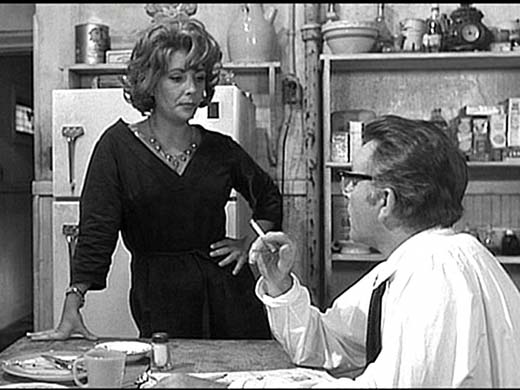 Elizabeth Taylor and Richard Burton in the film version of Edward Albee's emotionally chard play "Who's Afraid of Virginia Wolff."
I

come from a reasonable family. Until recently, this would have been the kind of comforting remark I could say in passing to just about anyone. Then came my acting classes, which, for better or for worse, have taught me to question why it is we consider the act of being reasonable a superior quality.

Over the centuries, we’ve come to associate rational behavior as essential to dealing with others in a civil manner. This meant learning to set aside strong feelings in favor of more socially acceptable responses, and anger wasn’t among them (it was unreasonable).

So, if someone asks you how you’re doing, you generally respond, “Fine,” even though just moments before the inquiry was made, you were sobbing hysterically in your car. Is the person seated beside you tapping their foot incessantly? A good (and reasonable) member of society chooses discretion over open irritation.

We make this choice because it seems to us candor would (or could) make matters worse. But is this constant social censorship a wise choice? Or even a natural one?

I still struggle with the answer.

A good (and reasonable) member of society chooses discretion over open irritation.

Acting teacher Sanford Meisner once called acting “living truthfully under imaginary circumstances.” An experience, as shown by an actor, is normal. It’s the circumstances that heighten tension. This matters, because actors are encouraged to express emotional honesty at the expense of concealing or repressing feelings to suit societal norms. Then again, some may say emotional honesty is also contrived, since many people think before acting.

These days, I’m being trained to be consciously (if not conscientiously) human, which includes being unreasonable.

This means switching from one side of the emotional spectrum to the other at a moment’s notice.

It’s hardly make-believe, since we often behave irrationally when we’re not closely monitored. It’s in a group setting that we tend to make adjustments, and those adjustments come from social training, which I know well.

Take this scene: A woman who accuses her boyfriend of cheating is informed by him that the reason for his evasiveness is because he has been preparing to (finally) propose. You wouldn’t expect gentle progression from such an encounter. In real life, the girl would most likely flip instantly from rage to joy, and it wouldn’t seem odd at all.

Evolution needs milestones, and I’ve let the concept filter into my own life.

But I come from a family of writers, so I’m familiar with the importance of a developed and credible character arc. In many romantic comedies, the heroine is touched when the guy saves a possum, or begins to like him when he gets her a vegan latte, and only falls in love with him when he founds a zoo in her name (which she’s always dreamed of).

Evolution needs milestones, and I’ve let the concept filter into my own life. Even if someone provokes me, it seems to me unreasonable to suddenly switch — “in the moment”— from laughter to anger. My teachers would disagree, citing the need to express “genuine emotions.” But can you order genuineness like a side of fries?

Some call these lurches “transitions.” In scripts, it’s your job to find your transitions, the moments when you go from one intention or state of mind to another. In comedy, transitions drive laughter, and in drama, they create the twists that touch us. And why do they make us laugh or touch us? Because they feel genuine and contain a sense of humanity that we can’t help but associate with.

To drive home just how natural these dramatic transitions can be (or feel), think of when someone darts into your lane of traffic without signaling first. Do you say: “How presumptuous! How disrespectful! Who taught him to drive?” Or, depending on your vocabulary, do you sound more like, “What an idiot!”

Too much reason may muddy our interactions. I’m not the only person who after an emotionally stressful event has had to cope with civil but hollow conversations that go nowhere, leaving you to think whatever went wrong is still painfully unresolved.

But thinking back, it all makes sense. In the conversation, I intentionally set my feelings aside to avoid being seen as the “emotional” girl. The awful aftermath is a direct result of having made that “reasonable” choice.

I’m coming around to thinking that if we let emotions “participate” in our daily life, we just might make all conversations richer. We’d confront what we’re up against with greater clarity and directness.

I’m not suggesting we dump reason. But I do think acting is pushing me past socially-driven self-censorship, and that might not be such a bad thing.