The making of a translator 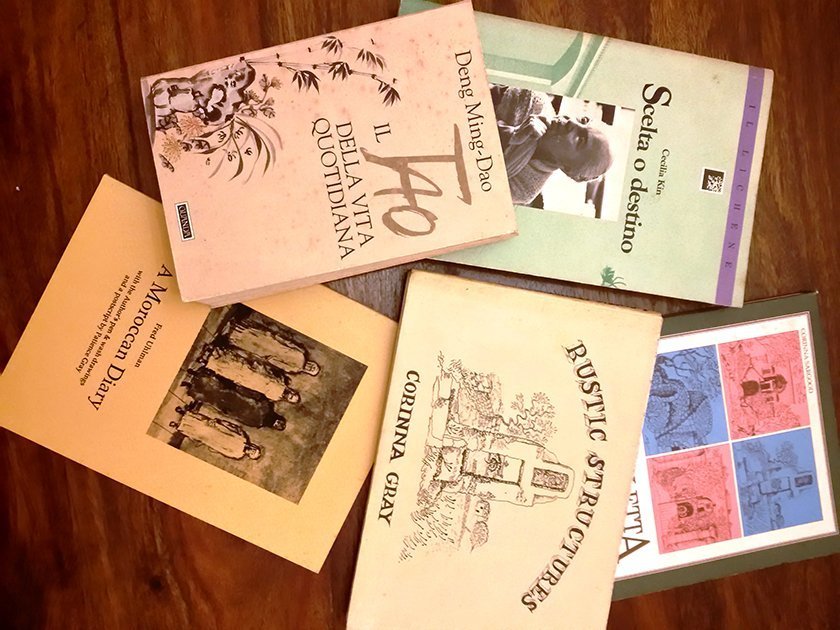 hings we long for sometimes seem to come true by chance. Or maybe it is a question of choice and destiny, as my Russian friend, the late writer, essayist, and scholar of Italian literature Cecilia Kin would have said. I say friend though we never met, but friends we were in certain way.

I saw Kin interviewed in 1988 on the occasion of the release of the Italian edition of her latest book “Vybor ili sud’ba,” translated as “Scelta e Destino.” I was so fascinated that I phoned one of her friends, the renowned Italian journalist Indro Montanelli, to ask him whether he could put me in contact with her. Montanelli kindly gave me the phone number of the Milan hotel where the Moscow-born Kin was staying. 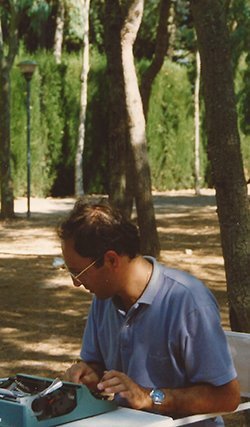 At work translating while on a camping trip.

We spoke, in what would become the first of several telephone conversations between us. It was just in time, because the next day she flew back home to Russia.

I wanted to buy a copy of her book, but she told me not to: she would have a copy sent to me by the publisher.

A few weeks later, I also received a letter with a photograph from Moscow: Kin was sitting in her tiny flat, a knitted shawl around her shoulders, her white hair in a small bun, overloaded bookshelves at her back. She was already 83, and until 1999, when she took her own life after a long illness, we spoke at least a couple of times a year. Cecilia Isaakovna Rubinštein was a survivor of the Stalin purges of the 1930s. Her husband, Viktor Kin, a Tass news agency correspondent from Rome, disappeared in a gulag after his arrest in 1937.

Nonetheless, she remained a convinced communist and often expressed her confidence in Michail Sergeevič Gorbačëv’s three great 1980s reforms. As it turned out, Uskoremie (economic acceleration), glasnost (liberalization, opening, and transparency) and perestrojka (reconstruction) would change the face of the Soviet Union and start a democratic process. Time would not prove her right with the Soviet system coming undone in 1991.

One of the things we sometimes talked about was my interest in translation. For years I had been toying with the idea of exploring this field, but honestly I didn’t know where and how to start. Very few universities offered courses in translation at the time, and none within feasible driving distance of my home.

As a fulltime teacher in the southernmost part of Italy, I could not attend classes in Rome or in the north of the country, where translation courses were taught.

I translated the little book, ticking on my Olivetti 32 under the shade of eucalypti and olive trees.

She suggested that I could try to teach myself. After all, hadn’t I had already taught myself English? I should choose an English novel or any other English piece of writing that had already been translated by a good translator and published by a reputable publisher (which meant that the translation had also been properly edited) and translate anew a few passages from the original, as if I were the first to turn those pages into Italian.

Soon after I would compare my work with the text published by one of the masters of the trade. Among my favorite Italian translator were Fernanda Pivano and Cesare Pavese, legends both, who had been among the first to introduce twentieth century American literature to Italian readers. Pavese’s rendering of Melville’s “Moby Dick” is still a kind of lectio magisralis.

My first endeavors were sadly disappointing. My outcome was obviously no match for Pivano’s or that of any other of her remarkable colleagues. However, I kept trying, with mixed results.

A couple of years later, my meeting with the English writer and artist Patience Gray completely changed my perspective and my chances. Gray, a translator herself and author of the bestseller cookbook “Honey form a Weed” (Prospect Books 1986), had been living with her sculptor husband Norman Mommens in Salento since 1970. She proposed that I translate a tiny booklet that the English artist Corinna Sargood had published in England in 1984. “Rustic Structures” was a collection of sketches of the Salento countryside and the typical local architecture, accompanied by inspiring notes celebrating an already disappearing traditional way of life. During the summer holidays, while camping with my daughter on the cliffs of Santa Maria di Leuca, at the very extreme tip of the heel of the boot, I translated the little book, ticking on my Olivetti 32 under the shade of eucalypti and olive trees. Patience Gray, fluent also in Italian and a rigorous editor, scrutinized and amended my work. At first she said, “not bad, not bad at all.” Then she took an 0.5 red Pilot pen and a couple of hours later my perfectly typed and clean papers were a battlefield of proofreaders’ marks, corrections, and notes.

Because of some misunderstanding another translator had been hired while my version had been forgotten.

Baroque art is one of the leading features of Salento, but the daring and elaborate constructions of the façades of the stately mansions and churches also find their counterpart in the language and style of the locals, apparently me included. “This is a simple, precious booklet,” Patience remarked, “it should trot nimbly like a gig, not proceed pompously like a four-horse carriage!” Exacting teachers are the best. I completely rewrote the text and the book appeared in Italian a few months later, my proud debut.

In 1994, Patience Gray unearthed another booklet, “A Moroccan Diary,” by her late friend Fred Uhlman, published by Penguin Books in 1949. To commemorate the tenth anniversary of the death of the author of “Reunion,” she decided to produce, at her expense and with the permission of the Fred Uhlman’s Estate, a small re-edition of Uhlman’s travel account, 35 numbered copies to give out to friends. The book was published in Italy by Levante Arti Grafiche in January 1995, with an afterword by Patience Gray. I could not resist the temptation of translating it into Italian, taking advantage, once again, of Patience’s patience. Later, I made contact with the Guanda publisher in Milan (they had already issued other works by Uhlman) offering them the translation, which they were eager to accept. I didn’t hear from them for months, until, one evening their editor-in-chief phoned me, announcing that the book had been published, but, to his great embarrassment and consternation, it was not my translation. Because of some misunderstanding another translator had been hired while my version had been forgotten, sitting on the desk in some subeditor’s office. He was particularly sorry, because, in the end, someone had fished up my translation, and “it was good.”

I was speechless, but he added, “Now, I was wondering whether you would agree to translate something else for us.” I couldn’t believe my ears. Still spellbound, I hasten to answer, “May I tell you, sir, that I have been waiting half of my life to hear these words?” My first translation for Guanda, a book of Tao meditations, appeared late in 1996. Twenty-four years, and 26 books, later I am still a disciple of St. Jerome, with a couple of dogs lying under my desk in lieu of a lion.