The Maintenance of Headway 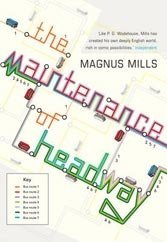 If a novel can masquerade as a ditty, then the dry-witted Mills knows how to pull it off. This wry sliver can seem at first like nothing more than a passing (if wicked) satire on the London bus system, with a patriotic nod to the quirks of double-deckers (“Venerable Platform Buses.”) That’s until you learn of the “Three Bears Syndrome,” namely “one bus running early, one bus running late, and one running exactly on time,” or the “push of pike,” “several buses running through a junction together,” or hear about the most luminous of all transit principles, “the maintenance of headway,” which holds that all buses shall always be on the move to avert the cardinal sin of earliness (not to mention the malice of “willful earliness”). Earliness is in fact the root of all bus evil.

What’s soon enough clear is that the ever-clever Mills, through buses, drivers, and inspectors (“lubricants in the mechanism”) has found a capriciously clever way of gnawing at the circular banality of bureaucracy. His dead-pan characters are determined to assign gravity to the near-absurd. Senior management worries about “the ratio between passenger numbers and journeys completed.” Holiday chocolate eggs (a bus company gift) require signing for. Concern about earliness is chronic. Old-timers are wistful for “the golden age of the ‘characterful bus conductor.'” (including Gunter, who loved cigarette smoke).

Among British novelists, Mills is uniquely able to poke subversive, ingenuous fun at people and situations otherwise beyond reproach. His ever-original work wears the dumb grin of satisfaction, which can’t be either wiped away or ignored.