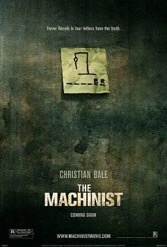 Passing lunatics can scar the most ordinary scenes. These are men and women who curse the planet or bay at enemies only they can see, whipping themselves into an offputting frenzy. Few take pity; most take their distance. Director Brad Anderson begins with a lunatic aftermath and works backward, burrowing into the criminal mind by inviting himself into the paranoia and delusion that presage the awareness of guilt.

Emaciated, reptile-like Trevor Reznik (Christian Bale, the film’s heart) is a machinist and a loner who looks like he hasn’t slept in a decade. His weight is dropping fast. He has no friends. He sees what isn’t there. His only comfort is a regular hookup with a whore named Stevie (Jennifer Jason-Leigh). “If you were any thinner,” she tells him, “you wouldn’t exist.” Something is eating him alive, but what?

A workplace accident involving a lathe seems turns Reznik’s already menacing life into litany of omens. People and photographs turn threatening. Appliances are plastered with post-it harbingers. Enemies appear, or seem to, and Reznik begins to lash out. Reznik’s bizarre descent seems all the stranger since he’s portrayed as an intrinsically decent man.

While the noir-spiked pursuit of paranoia is a cinematic chestnut, Bale transcends these limitations. His look is that of Dachau on foot and his insomnia the embodiment of some kind of nagging reminder.

Though it’s Anderson’s movie, his backing, and the film’s construction, is unmistakably Spanish, salted with Goya’s darkness and Dalí’s surrealism. Remorse is embroidered into the subtext, with the climax finally clearing up the loose ends, albeit predictably. Still, Bale makes it worth the wait. Though set in a West Coast U.S. city, the entire film was shot near Barcelona.