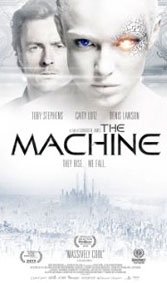 Welshman Caradog James’ entertaining but ultimately absurd little riff on artificial intelligence and super-soldiers gone amok opens with some credible eerie chords. In the near future, a gifted scientist, Vincent McCarthy (Toby Stephens), experiments on brain-damaged soldiers, installing regenerative implants to help revive consciousness. The ulterior motive is to create a race of intelligent machines to assist in an impending war with China. He recruits Stanford-trained computer programmer, Ava (Caity Lotz) who appears to have discovered a way to humanly sensitize potential troops.

But when Vincent’s bad guy boss (Denis Lawson) cancels her from the picture, the next step is creating an “angel of death” machine in her ultra-smart, ultra-beautiful image. Vincent’s underlying motives are pure enough — he wants to save his ailing daughter Mary — but what he “builds” turns out to be a 21st-century androgynous cross between Marilyn Monroe, Frankenstein and Rambo, a “clever imitation of life” with a heart and killer instincts. Lotz’s dimpled Machine is beautiful and sinister enough to conform to the necessary emotional and sexual dynamics. But soon enough, thought-provoking intellectual challenges meet the need for combat and obvious resolution, with the latter eventually hijacking, and ruining, a story with loftier possibilities.