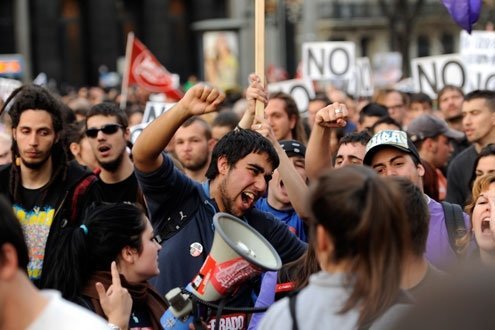 Student demonstrators protesting cutbacks and austerity measures clashed with riot police throughout Europe on Nov. 14.
I

It has led to new names and themes. The young unemployed are called “the lost generation” or belong to the NEETS (“Not in education, employment or training”), a category the British government concocted a couple of years ago. Polly Toynbee put the situation bluntly in a July 2012 column for the Guardian. Today’s graduates, she wrote, are “debt-burdened and scrambling for any barista job.” Many, she noted, will never have the career they were told a degree would bring.

However depressing, the facts speak for themselves. The European under-25 unemployment rate is nearly 23 percent, with European Union countries hosting an estimated 26 million jobless people. The problem is real and serious.

At the same time, it’s essential to find and emphasize positives. It’s important that light and hope be injected into media so that young adults aren’t inundated with so much daily despair that they emerge crippled.

Take the Evening Standard, which is London’s evening paper (read mostly by tube commuters their way home). Instead of engaging in the usual Toynbee-style lament, the paper has instead opted to get its journalists to run the “Ladder for London” campaign, which helps unemployed young adults obtain work through paid apprenticeships.

The campaign is a call to businesses of all sizes to hire an apprentice and has gained momentum in recent months with more than 400 jobless young Londoners getting apprenticeships. Many companies have also pledged to create programs that would hire a significant number of apprentices.

This is the kind of impact-journalism that today’s young graduates badly need. It not only recognizes the problem, but also shows a constructive willingness — by both media and businesses — in an effort to generate potentially life-changing opportunities. Graduates badly need support, not constant demoralization.

So, if some British media seems to have begun moving in a constructive direction, what is Italy trying to do for its younger citizens?

“Absolutely nothing” is what my Italian cousin told me last night. She’s staying at my place in London for a month while learning English and I had asked her to tell me her side of the story. Let’s just say the conversation wasn’t optimistic, never mind hopeful.

But the direction she’s taking is a revealing one. She’s in London to get a good grasp on English, which she hopes will set her a notch above the competition and give her a better chance of finding a job when she gets home.

It’s a path a lot of young Italian graduates are taking. London’s English-language schools are packed with young Italians eager to get a linguistic jump. Some are determined to stay longer and find part time jobs in local bars or cafes, or even, with luck, in their chosen field.

Italy should be aware of the trend and its potential consequences. It needs to be extremely careful to not permanently alienate its talented and intelligent crop of young graduates. If an increasing number of gifted graduates decide to take their skills elsewhere, basically an exodus of the country’s best young minds, Italy’s current economic mess will only deteriorate.

Italian frustrations already run deep. There’s no lack of talent and skills, but job opportunities are scarcer than ever. Small companies, burdened by taxes, won’t hire; larger ones are busy downsizing. The stories are legion, most of them demoralizing: People with doctorates searching and being rejected for months on end, only to decide to go abroad, where if their qualifications are strong they usually find work quite quickly. That they do doesn’t reflect well on the Italian reality.

Sadly, Europe is steeped an austerity-first mood, the worst possible situation for those trying to put their talents to good use. “We may lose [young] people forever if they don’t manage to enter the labor market when they are young and consequently don’t develop marketable skills,” Rome economist Gustavo Piga told the Financial Times in July.

Youth unemployment in Italy has been growing steadily over the last two years and now tops 35 percent, a figure that is a surreal three times higher than the overall national unemployment rate. Germany, which has a long tradition of internship programs for college and vocational graduates, has a rate of 7.9 percent. Protests, some of them violent, have held throughout Europe, including Rome and Milan.

Though you can’t hide from problem-heavy reality, you can at least try to be part of the solution. Italian media needs to help steer away from its daily emphasis on doom and gloom. Like its British counterpart, it must take a more active role in promoting campaigns that give graduates potential opportunities, if necessary creating its own. It needs to put constant pressure on government and private companies to assist graduates and young adults.

In Italy and elsewhere, veterans must begin to make room for younger workers. That or be asked to retire. No country can function, let alone move forward, if an entire generation is left behind. Resignation is a recipe for disaster, and that’s the risk Italy is running.