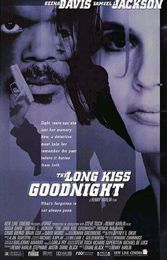 Housewife Samantha Caine (Geena Davis) sure chops onions fast. And she’s a great Mrs. Santa. Tidbits make the first 30 minutes of director Renny (“Die Hard 2”) Harlin’s “Long Kiss” an unexpected delight. The mild-mannered Caine is really a CIA assassin suffering from eight- year-long amnesia. Getting a whiff of the past, she hires motor-mouth private eye Mitch Hennesey (Samuel L. Jackson) to investigate. Turns out Mrs. Santa was once a lethal weapon called Charly. Bearings in place, Harlin throttles the movie into an avenging angel stunt-fest (Davis did her own). Still, all the rolling fireballs don’t mar the snarky chemistry between Davis and Jackson.

Mitch: “Do you always curse this much?”

Davis lost her way after “The Accidental Tourist,” or Hollywood overlooked her (Fiorentino’s fate). Either way it’s LA’s loss. She always had a great knack for comic timing.