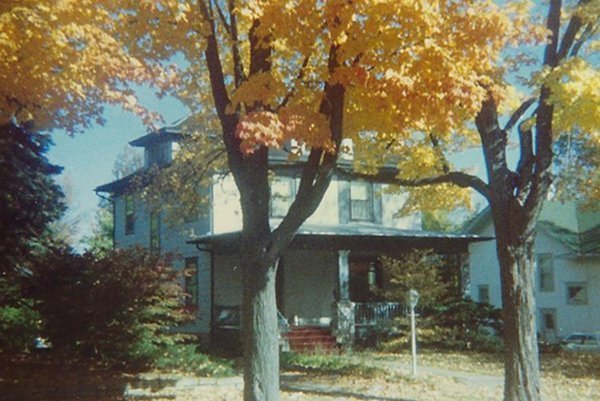 The author's childhood home in Iowa: gone with the wind…
I

t’s official: My father sold the family home in Iowa. After talking about it for almost a decade, he finally accepted an offer a few weeks ago. I can’t help but eulogize the place I’ve gone home to for the past 30 years.

I was 12 when we bought the house — the same year in which I transferred from Catholic school to public school, wrote my first poem, and discovered Guess jeans with the zippered ankle and signature triangle on the back pocket. It was the dawn of adolescence, and the house was a safe refuge from the first moment I walked into it. I remember being instantly smitten. According to my father, my mother and I turned to each other and said, “This is it.”

The two-story home built at the turn of the century had character: lots of hard wood, natural light, and old-fashioned floral wallpaper that was vintage before was that was fashionable. There were also refreshingly modern touches like bay windows and a breakfast nook.

The house came with a cool neighborhood — in the heart of the town’s historic district, two doors down from the brick carriage home where the painter Grant Wood, known for “American Gothic,” lived in the 1940s. It was walking distance to the Coop, a grocery store where you could get granola in bulk, and fresh hazelnut coffee and morning glory muffins.

Our block was filled with “liberals,” as my dad said, feigning annoyance. He was the street’s only fiscal Republican, which became glaringly obvious during election season, when his signs stuck out like a veritable sore thumb.

Un uomo di poche parole (A man of few words), with a soul for singing, my father would quietly go about shoveling the neighbors’ sidewalks, and they in turn would stick Pavarotti CDs in our front door for him at Christmas.

My favorite neighbors were Jim and Penny next door. Penny was a bookbinder, and Jim a poet, essayist and former basketball player who stood 6-foot-9. He’d bend at the waist to hug me. He reminded me of a tree, and from my bedroom window, I could see the light on in his study. That light alone may have saved me from a more turbulent adolescence.

I found that journal last summer, with the numbered pages of my first “novel.” I stopped at page 88, having interrupted myself throughout with confessional rants about why I hadn’t been writing every day.

I read “The Catcher in the Rye” in that house, then tried to follow up with “Franny and Zooey.” I fell in love with Kate Chopin’s “The Awakening” and Willa Cather. My mother handed me her copies of “The Little Prince,” and Carl Sandburg poems, which was as big as the Bible.

After my freshman year of college I came home to an unusually dark house, and my mother’s shadowy figure praying upright in bed. When she came downstairs, the fluorescent light in the kitchen that I’d never liked leaked her secret: she was wearing a wig. Before she even spoke I knew that she had cancer.

She beat it, though, that time at least, and I went off for an adventuresome near-decade of life in Italy. Every summer, I’d come home to the refuge of my bedroom, the safe space where I negotiated between the faraway culture with which I’d fallen in love, and the more prosaic one I’d been born into.

When I finally came home for good, it was to a house that was preparing for a quiet death. The blinds were drawn, and my mother’s Hospice bed was where the dining room table had been. Friends and neighbors stopped by with comfort food like chicken casseroles and mini apple pies from the local orchard.

A storm came the night my mom died, but by daybreak, the sun was out, filling the house with characteristic light.

For the next several years, my dad talked of selling the house. Instead, he bought so much stuff at thrift stores that our house began to resemble one. The more he brought home, the emptier the house felt. After two years of decluttering, the house was finally marketable, and quickly snatched up.

In truth, I’d already said goodbye to the house last summer. I was home for a poetry course, and one night, Jim and Penny, who also recently sold their house, invited us over for dessert. Other neighbors were there, too.

It was a rare huddle. I was pregnant, my dad was with his soon-to-be new wife, and life was transitioning beyond the bittersweet tug of the past. I looked over at my dad and saw a tenderness, a certain twilight that told me he was getting older.

“You’re going to miss being here,” I told him afterwards, back at our house. He agreed. “You’ve been well taken care of,” I added, knowing that I might as well have been telling that to myself.