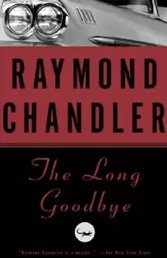 By the time the Red-baiting American 1950s rolled around, Raymond Chandler had become a crusty critic of modernity’s corrosive effect on social values. More than ever, his tough-guy private eye Philip Marlowe, though still a romantic at heart, was prone to shake his head at the mess unfolding around him and pause to light up a pipe — no longer kin to Bogart’s harsh, cigarette smoking presence. By 1953, when Chandler wrote his final Marlowe novel, the PI reflected the author’s middle age, and melancholy — “I might even have got rich,” says Marlowe, now 42, “small town rich, an eight room house, two cars in the garage, chicken every Sunday… You take it, friend. I’ll take the big, sordid, dirty crooked city.” Chandler wasn’t rich: he was 65; his wife was dying; life was burdensome.

Marlowe revels in little — aside perhaps from making coffee his way and playing out famous chess matches alone (“There wasn’t as much to spare as their once had been. The hard heavy years had worked me over…”) He befriends a quixotic British-American veteran named Terry Lennox, who soon takes the rap for the murder of his promiscuous millionaire daughter wife, a killing that doesn’t add up. He also falls for “golden icicle” Eileen, married to a drunken, self-loathing writer named Roger Wade, and eventually uncovers a tormented path that links two apparently separate deaths.

But this novel is less about killing and cops, private dicks and lushes, than a venue for world-weary insight. The Southern California elite is drug-addled or addicted to therapy. American lasciviousness, a carryover from the 1920s, has lost its allure (“Once in a while in this too sex-conscious country a man and a woman can talk without bringing bedrooms into it.”) The few good cops still around, though as brutal as ever, are hindered by bureaucracy. Though Chandler’s trademark verbal bull’s-eyes are everywhere — “Nothing ever looks emptier than an empty swimming pool,” the moral vacancy is as thick as the latest L.A. plague, smog.

“Most people,” says Marlowe, setting the tone as only he can, “go through life using up half their energy protecting a dignity they never had.” And elsewhere, just as fiercely: “We’re a big, rough, rich, wild people and crime is the price we pay for it…”

This is a brilliant potboiler about layers of missing dignity and wildness that roams over the troubled American horizon like a dirty light from a broken beacon.