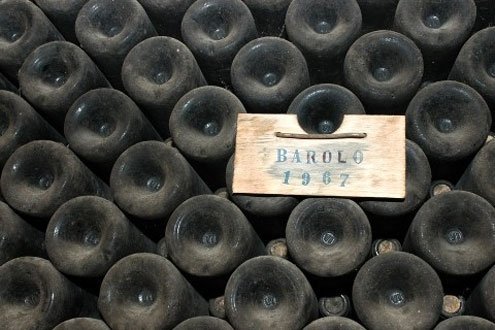 Not necessarily the best choice on its own.
A

friend called me from the United States in an unhappy mood. “I served an expensive 1998 Barolo last night,” she told me, “but my guests said they thought it tasted ‘off.’ It was really embarrassing.”

“The wine might have been fine,” I replied. “What did you serve it with?”

“Nothing,” she replied. “It was a hot summer night and people were out on the patio chatting while I was getting the dinner ready. I opened the bottle so they could drink while they waited.”

Since I hadn’t tasted the wine I couldn’t tell if it was corked, but even if the wine was good I was still fairly sure why it might have tasted “funny.”

Though Barolo remains one of Italy’s most famous and elegant wines, it’s not an “all-purpose” beverage. Made from pure nebbiolo grapes grown in Piedmont, it’s by nature austere. Even after 10-to-15 years of aging, most Barolo wines have a tannic edge (a dry sensation in your mouth). Their full flavor and beauty emerges best when served with game or beef or lamb. The fattiness of the meat works in counterpoint with the tannins. The result is a sumptuously smoky and earthy aroma that transmits truffles and dark fruity flavors.

If there ever were a wine to drink on a cold evening in front of a roaring fire with a hot meal, Barolo is it. Serving it on the patio in the summer heat, “naked” without food, was a little like sending a lone oboist or a cellist out to play Beethoven’s Ninth. The audience might recognize the piece, but they’d wonder what happened to the orchestra.

But my friend’s decision wasn’t unusual. In general, Americans are not steeped in food and wine culture and tend to live in a Robert Parker mindset in which wine stands alone, in the abstract, unconnected to the food it’s served with. That mindset connects price and score. A wine that costs $50 and up or gets a certain score (90+) is a “good” wine. The corollary is that a “good” wine is always a “good” wine independently of food.

That’s not necessarily a false assumption when it comes to American-made wines. American winemakers often begin with familiar international grape varieties and then tailor the wine in the cellar so that it’s “round” and “easy-drinking.” Though some Italian producers have followed suit, most have not.

A fascinating aspect of Italian wine is its inherently regional (even local) quality. Wine-growing areas are usually dominated by native grape varieties that are appropriate to climate, food and regional traditions. I panicked in my sommelier course when I first realized that some Italian regions had more native grapes and wine types than all of France or California put together.

But I came to see that as part of the fun. The exploration never ends. You’ll surely die before tasting them all.

The basic concept is to match the structure or heaviness of the food with that of the wine. A light, dry white wine goes well with a light salad dish or fish, while a big, structured red high in alcohol and tannins pairs nicely with meat and heavy sauces or aged cheeses.

A second rule of thumb concerns “similarity” or “contrast.” For example, sweet wine goes best with the similar (desserts), while dry wines are better suited to contrast. For example, Ligurian penne with pesto and Parmesan (fatty) pairs perfectly with a dry, white Ligurian wine like Vermentino that cleans the palate with its acidity.

A final thought on my friend’s Barolo problem. Serving a “big” wine as an aperitivo rules out lighter wines for the rest of the evening. Soaked in Barolo, the palate won’t taste them. That’s why classic aperitivo wines are light, fresh and low in alcohol (champagne or prosecco, say). Next in line as the meal progresses would be lighter whites, then heavier whites, then lighter reds, then heavier reds (Barolo), and finally fortified wines like port.

I’ll never know if my friend’s Barolo was spoiled, but the silver lining was great conversation about how to make pairings work, an art unto itself.