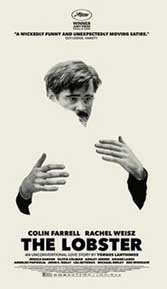 Many movies tagged as dystopian fail their billing. This one surely does. In a landscape that resembles today’s, single people are herded into a seaside hotel where they’re given 45 days to find a suitable partner. Rules are strict and robotic. Emotion is discouraged. Guests that come up empty are considered hopeless and promptly transformed into the animal of their choosing. Successful mate-finders are feted in a hotel ceremony, given a supervised honeymoon, and later moved to “the city” where they’re inserted into “normal” society. Couples that argue are assigned children to distract them. Escapees from the mating hotel are labeled “loners” and branded as outcasts. They live in the woods where hotel guests hunt them for capture and animal conversion.

Enter Colin Farrell architect David. His wife left him and his only company is his trusty dog (once his brother but transformed). It’s David’s last chance to find a new mate, and his saga will take him from hotel to woods, where he’ll meet a woman (Rachel Weisz) who will trigger personal upheaval.

Greek director Yorgos Lanthimos and writer Efthymis Filippou have devised a clever if often lurid parable about coupling in the absence of feelings. Love is ostensibly what separates humans from animals yet the humans here are eager to make animals of their fellows if they fail to live up to the prearranged conceits and conditions of mating. There’s a well-played Josef Mengele ingredient to all this permeates even the comedic.

Yet the Greek duo holds fast to its alarming vision, keeping sentimental interference at bay. Nowhere is mating portrayed as a matter of feelings, let alone messy human love. Even the loners don’t allow flirting. What intrigues the filmmakers is the word compatibility, and they carry their fascination to bizarre extremes — until David alters the script.

Early on, the hotel manager reassures guests that animal transformation isn’t such a bad thing. “Just think, as an animal you’ll have a second chance to find a companion. But, even then, you must be careful; you need to choose a companion that is a similar type of animal to you. A wolf and a penguin could never live together, nor could a camel and a hippopotamus. That would be absurd.” And original, as is this film, which was rightly prized at the 2015 Cannes Film Festival.