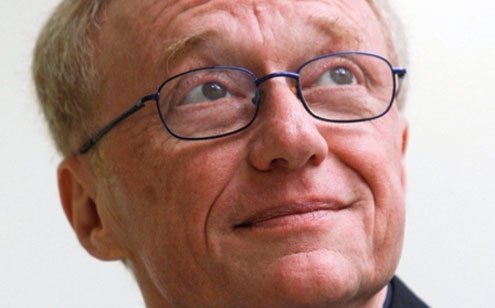 In addition to his fiction, Grossman is known as an activist and a critic of Israeli policy toward the Palestinians, seeking a two-state solution.
W

The first speaker, the dramatic persona “Man,” wails to his long-dead son: “You are fallen out of time.” In Man’s mythic town all mourn their dead children. Aloud, each bemoans the “timeless border” of death that divides them from their lost progeny.

Like most epics, Grossman’s 167-page poem concerns a heroic and universal struggle, this one against death and bereavement. For some townsfolk, the impossible loss arrived recently; for others it was decades ago.

This landscape of grief shapes lives in a self-sustaining rural settlement situated on flatland surrounded by bare hills. Grossman never directly alludes to the resemblances between this community and the socialist-utopian Israeli kibbutzim. But strong similarities underline the author’s dramatic, disaster-survival template.

Parents speak compellingly until their words swell to a communal crescendo. Nameless, like their town, the characters are identified solely by their simple, timeless, and primary social roles. There is a cobbler but no shoe shop (there are no shops at all); there’s a midwife but no doctors. Despite their universality, these people are unforgettably individual. Grossman sharply etches each character. Some are grotesque, all are inexorably tragic.

Scene one: the couple called “Man” and “Woman” sit to dinner in their home. It’s been five years since “the notifier” told them of their son Uri’s death in combat (Grossman’s 20-year-old son Uri was killed in action in 2006). His parents’ throats remain literally frozen to silence. Their mute gestures underline the theme of desolate grieving.

Suddenly, in a voice hoarse from disuse, Man speaks: “I must go to him… go there.” To that “timeless border.” Hoping “To see Uri once more.”

Terrified by implications of this break with the known world, his wife remains behind to observe and reflect on her husband’s pilgrimage.

Leaving his home, Man circles it. Then he rounds the village. He walks in ever-widening circles he reaches surrounding hilltops. Man becomes “The Walking Man.” His neighbors will watch his wandering form etched against the hilly skyline, where a vague luminescence now glows. One by one townsfolk rise to become “The Walkers” who follow him in his wild hope.

Accompanied by his ever-present notebook, the Town Chronicler joins the staggering line of sorrowers along the hilltops. He, too, has lost a child. But staying close to other townspeople is also his job. Long ago, a “Duke” in mourning charged him with recording his neighbors’ laments.

Certainly the “Duke” title is oddly anomalous in a survival-level community. Is this Grossman’s nod to the lofty status once associated with epic figures? Or is it just a device to confer power, giving one community member license snoop on the rest? The chronicler eavesdrops outside open windows and doors, scribbling down overheard words that describe a sorrow buried in each inhabitant “like concrete, or an ingot of iron.”

He spies on everyone, including the Centaur, who is half-man, half-desk, a childless parent and one-time writer who can no longer put pen to paper. The Centaur alone speaks in enraged, caustic prose, concluding with a poetic outburst at volume’s close.

There is the elderly Maths Teacher, who 26 years after his daughter’s death insists, “I still know nothing about it.” In a childish voice he instead recites multiplication tables: “Two plus two equals four.” This at least is what he knows.

There is the Net-Mender. “At midnight she stirs from her skein of fish nets…” her “mouth gapes like a third eye”… “She groans.”

Honed by pain, these voices evoke the bleak vacancy of calling our to child who will never again answer. Grossman’s feat rests in evoking a vortex of sentiment without sentimentality.

It would be difficult to overstate Grossman’s achievement. “Falling out of Time” is brilliantly conceived and executed. Sections of short, drumming lines entwine with longer, equally insistent verse, or with prose poems.

Voices ring one upon another. Heightened emotion and unexpected image- juxtaposition charge the story. It’s the dynamic rhythm and the context of words that parallel the driving grief of Walking Man and his fellow villagers.

Consider a few of the rapidly alternating verse forms:

“Here I will fall

Now I will fall-

Or dialogue, as between Man and Woman:

Or The Walkers’ choral sweep, which drives the last third of the epic:

This grief, when parsed and shared, creates its own kind of cathartic resolution. Grossman’s epic both lacerates and heals, as it recounts love, loss, disaster, and — most essentially — disaster’s survival.