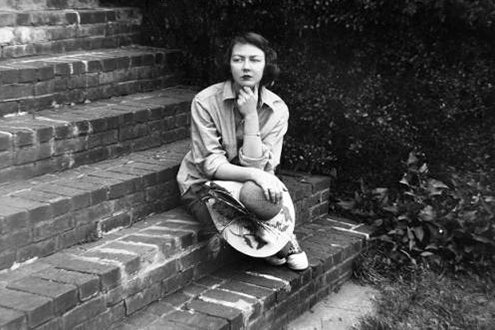 Flannery O'Conner, who died at 39, five years after this photo was taken, has a fiercely guarded legacy.
I

n the fall of 2014 I directed a reading of “Parker’s Back,” the last short story written by American author Flannery O’Connor, renowned for her fiction set in the American south. The reading was part of a symposium at John Cabot University Rome commemorating the 50th anniversary of the author’s death. As director, I had to obtain literary performing rights, a first for me. Having acted and directed in productions with community theater companies I thought this would be a routine matter. Then I ran up against W. Louise Florencourt, the executrix of the author’s estate.

A writer’s estate includes copyright and other intellectual property rights of published works such as film and translation rights. It may also include unpublished works and documents of literary value such as diaries and correspondence. Often, what’s most valuable is the writer’s reputation.

The heirs of authors vary in their goals. Some care only about financial gain. But to many heirs as well as other beneficiaries of an author’s works, such as universities, libraries, foundations and the reading public, the value of an author’s legacy as a whole is priceless.

This makes careful management of an author’s estate, and of the literary treasures it potentially contains, a critical issue. The person entrusted with the task has a fiduciary responsibility to the author as well as their heirs, beneficiaries and the public. What’s handed to the literary executor is trust. And not everyone is up to the task.

Florencourt definitely was. Her reputation for strictly upholding that trust on behalf of O’Conner’s works quickly became apparent. A Harvard-educated lawyer and first cousin of the author (O’Conner died in 1964 at age 39), she is co-trustee of the Mary Flannery O’Connor Charitable Trust, established by the estate of the author’s mother to control the author’s literary estate. It owns all copyrights to the author’s works.

William A. Sessions, Regents Professor of English Emeritus at Georgia State University and Flannery O’Connor’s authorized biographer was my first contact in trying to reach Florencourt. He put me in touch with the literary agent for the estate but first let me know that the text of “Parker’s Back” could not be edited in any way for a reading. “There is no mercy … no flexibility — the whole text and nothing but the text,” he told me.

Ben Camardi, the agent, confirmed the estate’s approach. “Any stage production must be presented exactly as the stories were originally published — verbatim.” This meant including every “he said” and “she said” in the text. He also let me know that since the estate was bound by exclusive contracts for movie rights. It could only give permission for “non-dramatic readings” – no actor could add emotional interpretation. This meant that the actors could only sit and read.

Knowing these limitations I corresponded with Florencourt. Camardi acted as the intermediary. Florencourt wrote that she’d had poor experiences in the past with productions of O’Connor’s works. She felt some had been embarrassing. As a result, she was reluctant to grant rights.

I explained that non-dramatic rights were sufficient, as the author’s words were enough to bring O’Connor’s stories to life. Good stories read on radio mesmerized people for decades and still do, now also in audio books. Florencourt agreed and a contract was signed.

Not all estates are overseen as well as O’Connor’s. Following Henry James’ death his brother’s family took control of his estate and, concerned over James’s reputation and his literary legacy, had many of his personal letters edited and his biography manipulated to avoid hints of his sexuality. Friedrich Nietzsche’s sister edited and forged her brother’s writings to make him seem anti-Semitic, which eventually branded the author as the “godfather of fascism,” badly damaging his reputation.

Franz Kafka’s executor Max Brod saved the author’s works. Kafka’s will called for the burning of his writings after his death. Brod refused, saying Kafka had kept him as his executor knowing full well Brod would never carry out Kafka’s wishes.

There are also countless examples of writers who never take the step of appointing a literary executor. American fantasist John M. Ford failed to make a will and his literary estate passed to his estranged wife instead of his long-term partner.

In 2014 in Italy, after an acrimonious court battle with Giorgio Bassani’s heirs over his estate, Dr. Portia Prebys, his long-time companion and John Cabot University Trustee, donated a significant archive of the acclaimed Italian author’s works and personal memorabilia to his native city of Ferrara.

That same year Florencourt and her co-trustee agreed to place Flannery O’Connor’s archive, including letters, journals and notebooks, artwork, photographs, slides, negatives, legal and financial records with Emory University in Atlanta, Georgia. The University is a proven steward of literary collections and the author’s works will be preserved and made available to the public.

The checkered history of how literary estates have been handled bespeaks the need for every writer to take steps to ensure the preservation of their life’s work. Any writer of repute needs to find a capable person to whom to entrust their literary legacy, recording the appointment in an estate document. This essential act can save grief for heirs serve as a gift to literary history.

The reading of “Parker’s Back” was successful. Of course the actors did display emotion, at least some: they’re actors after all. It seemed as though O’Connor was egging them. If so, Florencourt would have surely approved.