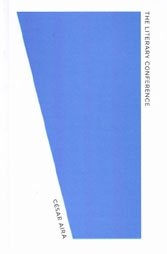 Could you be that hard-luck translator and “superhuman literary critic” who doubles as a Mad Scientist and secretly lusts for world domination? Or maybe you’re the reformed alcoholic with a little-known penchant for sex slaves who got into making cloning machines because of a fear of baldness? Either way, here’s an idea (which can double as a hilarious parody of literary pedantry): While attending a literary conference, solve an ancient riddle about pirate treasure and then create a wasp the size of speak of dust (housed in cellophane fashioned into the shape of a Swiss chalet) and dispatch it to steal a living cell from Carlos Fuentes (present at the conference) so you can reproduce him to a make a race of all-conquering geniuses to which you can then defer while not forgetting to instruct those who want to stage your play about Adam — who is already married — and Eve — who ends up decapitated — to do so at the Mérida airport in such a way that arriving passengers walk “in single file across the stage carrying their bags and suitcases but without interrupting the show.”

Too much to ask? Not for the eclectically radiant Aria, for whom “beloved cerebral activity” is circus-tent nourishment and “everything is instead of something else,” life as permanent metaphor, characters in the image of mental whirlwinds, actual or comic, or both. Aira’s Argentine business card might read “Literature, cloning… transformations….” Or “mini-man Speedometer…” His playful dream-peeling is related to but not like that of Borges, Cortázar, Kafka. His is a “mental configuration different from all the others.” King-of-misfits Roberto Bolaño adored him. His “translated” worlds are built one ingenuity at a time: B-movies talk to baldness, cloning gizmos bond with old Cadillacs.

The Mad Scientist of the Carlos Fuentes cloning project (named César of course) notes that even weird schemers have soft spots: After all, he once fell for beautiful Amelina, except that he forgot to write down her address, “a meaningful lapse.” Or was it a metaphorical mistranslation? Never mind. Enter Amelina’s friend Nelly, which in turn leads to the emergence of colossal blue silkworms. Moral of the story: Tell your cellular wasps to stay away from Italian ties.