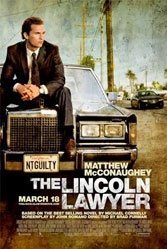 Director Brad Furman’s tighten-the-noose-slowly legal thriller plays two aces, a good story (from detective writer Michael Connelly) and a winning performance by Matthew McConaughey, who used this film as a trampoline for his forty-something acting resurrection.

McConaughy is Mickey Haller, a high-priced opportunistic L.A. defense attorney disliked by cops and fellow lawyers alike because he gets scum off the hook — a hackneyed procedural bromide (his Lincoln Continental limo plate reads NTGUILTY). But Haller is also cocky, charming and persistent, has a separated partner who’s still crazy about him (Marisa Tomei) and a daughter he clearly adores. So, under the tough guy act beats a heart.

That heart, and his conscience, is tested when he’s called on to defend spoiled rich kid Louis Roulet (Ryan Phillipe) charged with bludgeoning a prostitute. It seems like a slam-dunk, with Haller falling back on unorthodox tactics and legal tricks of the light assisted by friend and investigator Frank (William H. Macy). But something about the tidiness of the case piques Haller’s skeptical side, and digging gradually opens a door that makes one case into many.

This is when Furman turns up the heat, pitting his increasingly hemmed in lawyer against an adversary who seems to have outmaneuvered him from the start. Haller is compelled to review his values, and how he’s cavalierly come to condescend to L.A. scum. The luminous McConaughy imbues Haller with equal doses of surprise and rage, with his slyness going into overdrive both in and out of the coatroom. His vanity unexpectedly humbled, Haller goes to war. And a supremely entertaining battle is joined.