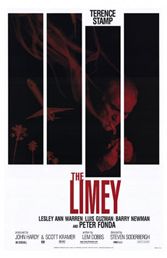 Fine work from Steven Soderbergh (“Out of Sight,” “Traffic,” and “Erin Brockovich”). Ex-con Wilson (Terence Stamp) heads for L.A. to avenge his daughter’s murder. Though mean and tough, Wilson is not genetically wired for L.A. and what seems like a gangster revenge movie turns into a study of culture shock, maladjustment, mourning, and incompetent revenge (“You’re not from around here, are you?” a DEA agent says). Wilson — a low RPM Ben Kingsley; think “Sexy Beast” — gets help from American ex-con Edwardo Rouel (Luis Guzman) and the two men close in on record producer and sexual predator Terry Valentine (Peter Fonda), the movie’s homicidal shyster. Fonda’s amoral cynicism is pitch-perfect; Stamp is among the finest British actors of an exceptional generation; bit-part Guzman finally gets a chance to act.