The Light of Day 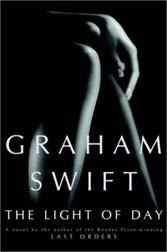 A London whodunit played out in reverse in that crime and culprit are clear from the start. George Webb is a world-weary private detective (“matrimonial work”) in love with one-time client Sarah Nash imprisoned for murdering adulterous husband Bob with a kitchen knife. Swift, author “Waterland” and “Last Orders,” uses George’s glum routine to probe the morality of motive.

A shamed cop turned private eye, George is disenchanted with intimacy. He’s divorced and lonely. ”I’ve seen quite a few couples,” says George, “who’ve come to grief, who’ve gone to war, for no other reason, so far as I can see, than that over the years of being safe and steady and settled, something’s got lost, something’s gone missing, they’ve got bored.” The novel is divided into 67 chapters that read like splinters, so lean is Swift’s prose.

Some critics have compared George and Sarah to Graham Greene characters: mournful, guilty, moored to their own longing. But for Swift there is no grace-hole through which squirm. There is no God option. Disgrace is constant, the matter at hand is to establish honor within it. A chiseled, compassionate work.