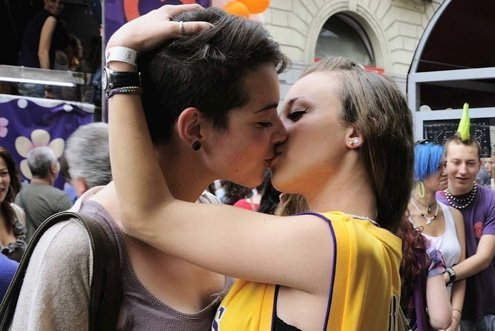 aleria has been a close friend of mine since I first came to Italy. She was raised a Catholic by a domineering mother and an irresponsible father. As an adult, she tried rejecting religion in favor of a more secular viewpoint.

Valeria and her husband lean politically to the left, more specifically toward communism. She embraces ideas like solidarity to the point where a simple invitation for a beer in two quickly morphs into a collective event. She’s also a strong supporter of community-based programs and she is always organizing cultural tours to museums and galleries. She is a font of information about community organizations and has been involved with a group that provides support to families of children with disabilities. All the same, I’ve heard friends make little quips about Valeria’s inability to distinguish between the hammer and sickle and the crucifix.

Over the years I’ve had the pleasure of watching Valeria’s daughter Alba go from diapers to university. Even as a little girl it was clear that Alba was a strong and independent person with above average intelligence. I remember Valeria telling me about one of Alba’s grade school projects in which the teacher had asked the children to make a poster-size collage about their ambitions and desires for the future. The morning the assignment was due Valeria and Alba met the other mothers and their children gathered outside the school. Each child carefully held up a poster with images of what they hope for. Not surprisingly, the boys were plastered with pictures of racecars and football players while the girls’ posters were filled with fashion models and designer labels. Alba’s poster, however, was fill with images of scouting and environmentalism.

As Alba grew, she remained dedicated to scouting and rose to the level of Scout leader. Consistent with the values of social justice and collective action that her parents had instilled in her, as a teenager she attended many protests for human rights. Along with one of her best friends, Giorgio, who is gay, they started a gay student association in their high school.

Many times I’ve listened to Valeria’s concerns about typical problems, the kind that all parents face. I’ve heard about Alba’s acne crisis, I’ve listened to the right time to let Alba have her own smart phone/tablet/computer, and at what age should she be allowed to meet friends at night, and what curfew hour is reasonable. I’ve always suggested Valeria take a soft line rather than an authoritarian one.

Valeria and her father Claudio also did their best to ensure Alba received a global education. When Alba turned 16 they spent a summer in New York City. When she turned 18 they vacationed in London. One friend suggested that maybe the time had come for Alba to be more independent. “What 18-year-old wants to spend their summer vacation with their parents?” Eventually, Alba decided to study architecture at university. Alba’s entrance exam scores were very high. She’d grown up to be a very remarkable young woman and a daughter to be proud of.

Last month, Alba told her mother and father that she didn’t really have any interest in boys but she liked girls, even though she had only ever shared one kiss with another girl.

After a lifetime of preaching social equality and justice both Valeria and Giorgio responded very negatively, though I was told that Giorgio was far less severe and argumentative. Valeria reportedly refused to speak to Alba for more than a week. At work, Valeria repeatedly burst into tears and proclaimed how disgusted she was by the idea of two women kissing.

I didn’t see Valeria as this drama unfolded. I was updated their friends. I soon received an indirect message from Valeria that she didn’t want to talk me about the “issue.” The bearer of the message suggested Valeria believed I couldn’t possibly understand what it feels like to be a mother.

In the meantime, Valeria has talked and cried to anyone willing to listen about how she’s been made into a victim. This has included seeking out the expert advice of the closeted homosexual director of the family with disabilities group.

As time passes, fewer and fewer people are willing to listen. Some friends criticize her outright. She’s apparently seeing a therapist to help her through her self-inflicted pain and suffering. I’m concerned that any intervention on my part would only fuel the fire, though I’m tempted to call her out. “Look at the damage your bigotry and intolerance has caused,” I would tell her. “It didn’t have to be this way.”

And what about Alba? This young woman has just taken one of the bravest steps of her life only to discover that the two people she most trusted have pulled the rug out from under. She has probably been left to question the system of values and beliefs she was taught. I suspect this will have negative ramifications for Alba for the rest of her life. From a distance, I can only hope she finds people to guide and support her during this epic experience.

— PFLAG is the national association for parents of LGBT people in North America. In Italy, AGEDO offers support and assistance to parents of LGBT people and supports LGBT civil rights and the affirmation of personal identity. Headquartered in Milan, they have offices, phone numbers and contact emails throughout Italy.