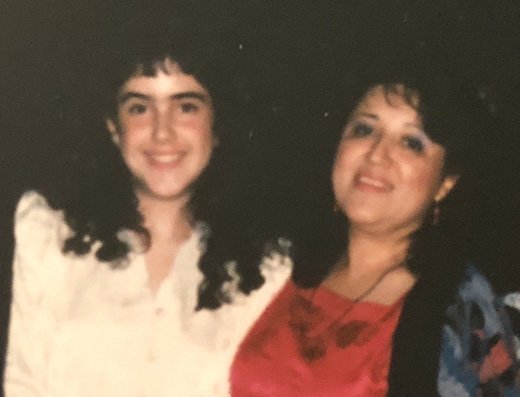 The author and her mother.
I

can’t sleep lately. I get to bed reasonably early, usually by 11 p.m., to then wake up at 3 a.m. in a dark, quiet room. I get up and go the couch, where my cat has fallen asleep. He picks up his head and looks at me blinking. Sometimes I try to read; at others, I check emails. I sometimes close my eyes and listen to the sounds through my open window. Living off a busy street in a big city, there is always bound to be an intermittent car or an early bird.

After an hour or two I go back to bed and occasionally I fall asleep again. Then around 6 a.m. my cat parks himself behind the bedroom door and starts meowing nonstop. He’s the most vocal cat I’ve ever known – which isn’t saying much because he’s the only housecat I’ve ever had. I adopted him after moving here, my first apartment in Los Angeles without roommates. He came with the name Boswell, after a Scottish poet. I call him Bozey for short. It suits him, a beautiful orange tabby with crazy long whiskers. I can’t believe I’ve had him for four years already.

Once, shortly after my grandmother died, I had a dog, an extremely cute, playful Bichon Frise mix I adopted from a rescue organization when he was only one year old. His name was Sammy and though he’s still alive and still very happy, he isn’t mine any longer. When I went to live overseas, I found him a wonderful home with friends in South Florida. After I returned a year later, it seemed cruel to try to move him from where he’d become comfortable. His new family truly loved him and took good care of him. I moved back to California and eventually acquired a new pet. I keep in touch with Sammy and his family, so I know how he’s doing and what he’s up to. But I’ll always remember him as a pup, those first two and a half years when he was truly mine.

I want something to happen that makes me know my mother has heard me. In the same way that my cat wants to persistently meow until I get up.

I wonder at times if that feeling is similar to having a child. For a while, a fleeting moment really, they are yours. And then one day you have to let them go out into the world on their own. They may choose a life very different from yours. It might be alienating. It can’t be easy.

The same thing happens when a loved one dies. Even if you’ve known them your entire life, you must release them in a way that seems so final. On Mother’s Day this year, I walked around the cemetery where my mother is buried. Her headstone lies a few feet away from her father, who preceded her, and her mother, who followed her. The most recent family member to join them is my mother’s uncle, who passed away just a year ago. Around them are people of every race and creed, headstones of those we didn’t know. Lives we’re close to only in death.

Sometimes I want to speak to my mom so badly. I want to keep trying until something happens that makes me know she’s heard me. In the same way that my cat wants to persistently meow until I get up. I want a sign, some sort of acknowledgement.

At times I feel like I can still sense her soul out there in the universe. Maybe she knows things before I even tell her about them. She hovers just on the other side of this dimension, visiting me in dreams. It’s not at all the same as having her physically here. But it’s something.

My mother was remarkable. She had insight into peoples’ hearts and minds that very few possess. When she spoke with you, she understood who you were at the deepest level. She was kind, giving everyone the benefit of the doubt. She brought lightness and laughter into conversation. She was also a true beauty. In those ways, I’ve always wanted to be like her.

I might not get the chance to be a mother of children but I hope one day I’ll leave an unforgettable impression on a few special people, a legacy of love that lives on after I’m gone, just the way my mother did.