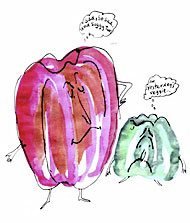 y mother loved lamb shanks browned in olive oil, then braised in red wine with fresh garlic, carrots, onions, and a touch of fresh rosemary. There were always several in the freezer. But one day, as I watched her yet again cutting off the shin and putting the haunch away for the oven or grill, I finally asked, “Mamma, why do you cut off that part of the leg?”

“I’ve always cut off the shank. Everyone knows that. You’re supposed to!”

(I, too, had done it for years, without thinking, just following mamma’s directions.)

She gave me one of those mother looks.

“Go ask your grandmother,” she answered. “She always did it and so do I.”

Off I went to badger my formidable grandma, whose passion-for-cooking genes clearly surge through my veins.

After much questioning of the amazing number of cooks in our family — and brilliant deduction — I solved the mystery: My great grandmother cut off the shank because the oven was too small for the whole leg! Duh.

So many of our basic cooking habits are based on old assumptions badly in need of reexamination.

In the 1950s and 60s for example, when only the lowly, indigestible green bell pepper existed, even my talented and innovative mother had no choice but to turn out a soggy, saggy stuffed pepper which, even now, is the Madeleine of my childhood. It stirs up forgettable grey tastes and memories of the burbs. There were no markets with glorious deep red Sicilian peppers — perfect containers for golden yellow, chocolate brown, and deep orange stuffing. Now, anyone can turn out great pepper dishes.

Another example are dried bay leaves. I’ve tried in my cooking classes to dispel the near-religious belief held by some recipe writers that bay leaves always enhance the flavor of soup, casserole, or stew. Myth. Bay leaves are unsurpassed in keeping those little moths from dining on your sweaters and they’re indispensable for real Indian recipes (in very tiny bits, mind you), but they are also unsurpassed in ruining the flavor of almost any dish calling for them. Yet they’re still overused and considered a staple.

Sometimes these myths begin for practical reasons (short ovens) and other times because cooks don’t know, for example, that fresh garlic is always superior to garlic salt, that fresh herbs are infinitely tastier and more interesting than dried ones. Cooking and eating habits begin in childhood, and despite the Slow Food movement and a wealth of innovative new chefs, most Americans stick to stubborn old habits.

Alice Waters at Chez Panisse in California tried steering both the public and the next generations of cooks toward only fresh seasonings and minimal, simple cooking, but the process will take time. Take a moment to examine your cooking habits. Consider the myths about “the way it’s done.” You might come up with some surprising new ways to enhance your recipes.

And the next time you consider one that calls for that dried-up garlic salt, oregano, or bay leaves at the back of your spice shelf, or an unripe pepper, or a leg of lamb with shank removed, take heed. Use your intuition and the plethora of beautiful fresh ingredients to be found in your neighborhood markets, and toss the rest in the dust bin. (Well, maybe not the shank. It’ll be awfully good using my mother’s recipe.)