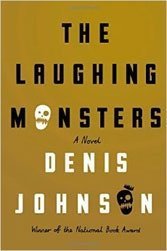 In 2002, Italian intelligence informed the CIA that Saddam Hussein’s Iraq was chatting up Niger about buying enriched uranium. Later came NATO whispers that Saddam was shopping for the same in Somalia and the Democratic Republic of the Congo. The allegations turned out to be something of a red herring, if not a spook-fueled ruse, but the then-feverish Bush Administration seized on nuclear titillation to fortify its anti-Saddam campaign.

American novelist Denis Johnson — who is a more cunning writer than this book might suggest — has seized on that fecklessness. The narrator of his engaging if erratic novel, set in 2012, is NATO spy Roland Nair, a Danish-American, Swiss-educated army captain and Africa veteran dispatched from Amsterdam to Sierra Leone to track down a rogue Ugandan and U.S. Special Forces attaché (and “lapsed animist”) Michael Adriko who, lo and behold, has gone AWOL — maybe to peddle enriched uranium. Nair and Adriko, scammers of a feather, are “friends” from previous off-the-books exercises, their ragged old ties given new traction by Adriko’s impending marriage to Davidia St. Claire, an American from Colorado who also happens to be the daughter of the local Special Forces camp commandant. It’s wild but implausible stuff.

But Johnson knows the drill. His 1986 “The Stars at Noon” centered on a soul-searching woman trawling the human and political detritus of Nicaragua. In fact, urine-scented Freetown (pre-Ebola), Uganda, and finally northwestern Congo are kin to 1980s Managua, only fast-forwarded into ambiguous post-9/11 territory (“an expanded version of the Great Game,” says Nair). For Johnson, West and East Africa are a no man’s land populated by duplicitous, whoring mercenaries who incongruously jumble greed, machismo, and romance (Nair falls for beautiful but poorly fleshed-out Davidia).

But changeling Adriko, tinker, tailor, magician, opportunist — “More will be revealed,” he quips incessantly — is most at home in Johnson’s surreal narrative (also drenched in Nair’s unsent emails). If vaguely corrupt Nair is the journeyer into this fully corrupt (and surreal) heart of darkness (“this land of chaos, despair…”), then it is Adriko — Johnson’s comic black Kurtz — who represents the amorality of the whole by playing off the sullied sides. “Since nine-eleven,” says a CIA Op, “chasing myths and fairy tales has turned into a serious business. An industry. A lucrative one.” Johnson seems to want to X-ray myth, lucre and industry, but the Graham Greene marrow of the story just doesn’t measure up.