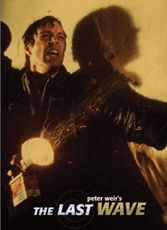 Peter Weir’s early films share Kelly’s interest in the paranormal and Armageddon. “Picnic at Hanging Rock” nudged the clairvoyant, but “The Last Wave” ups the ante, pinning the end of the world on cultural transgression.

David Burton (Richard Chamberlain) is a Sydney barrister who reluctantly represents five taciturn rural aborigines charged with murder, apparently as part of a tribal ritual. The men, who won’t or can’t discuss the killing, are drawn to Burton like moths to flame.

Weir lets information trickle out. Burton was born in Argentina. He dreams of heavy rains and floods. His wife is rightly unnerved, but the aborigines come to believe he’s their promised seer, the link between continents.

Omen movies depend on the credibility of the lead, and Chamberlain effectively conveys the despair of a man who knows he’s stumbled onto something deeply amiss. The feral aborigines, led by young Chris (David Gulpilil) and Charlie (Nandjiwarra Amagula), who speaks no English, are waking amulets or goblins, but they’re also primal compasses. Burton sees their cave drawings and is mesmerized. From this, Weir builds a stylish reckoning.