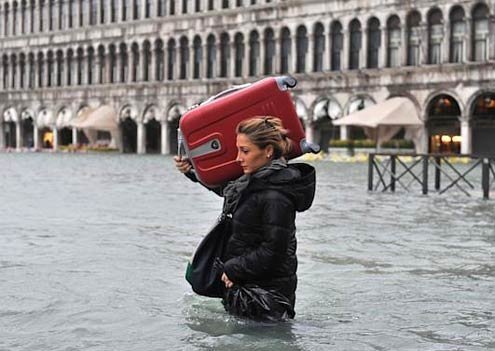 A week after Hurricane Sandy, Venice was swamped with massive flooding.
O

n the day before Thanksgiving, an unseasonably warm day, I paused to chat with my doorman. He was busy sweeping leaves off the sidewalk. I asked him if he knew the next day’s weather forecast. He shook his head. “As long as it’s not a hurricane followed by a snow storm, it’s going to be fine.”

I could only laugh. He was right. Anything else would be just fine.

The last thing New Yorkers want to think about is Hurricane Sandy, which still lingers in the back of everyone’s mind, including my doorman’s.

Weeks after her departure, she still haunts the city with upturned trees and scattered branches, many of them still unmoved. Bags of donations are still piled high in the lobbies of local restaurants and banks. High-water streaks mark the sides of buildings many blocks from the rivers’ edge. Power is back, but powerlessness remains. What happened in early November has changed the city.

New Yorkers are often seen as arrogant and snobby; they’re criticized for seeing themselves as better than everyone else. Part of it is for good reason. The city’s ability to handle adversity and diversity, trade and turmoil, industry and controversy, all of it packed into a sliver-sized island, gives its inhabitants an inner bravado. Life here can demand stamina and tolerance. People bunched together in boroughs and overlapping states are asked to weather all kinds of storms together.

It can be humbling and have aftereffects. I’m not sure I’ve ever seen the streets of Brooklyn and Manhattan as quiet as I did while walking around on Thanksgiving weekend. Big holidays generally leave the city empty. People travel. But this was different. The sense was that New Yorkers had fled.

Some returned to family homes and sought solace in familiar childhood landscapes. Many craved the palpable safety afforded by a bustling kitchen warmed by roasted meat and potatoes. The day’s gratitude suddenly meant more than just friends and family gathered around a table giving thanks. It had an undercurrent of “thank goodness we’re okay.”

From afar, uneasy questions arose, at least for me.

Should I stay in New York? Can the city handle this again? New York City and lands around it are at sea level. There’s no high ground. What’s ahead as the seas keep rising?

Venice and the Netherlands have defended against flooding for centuries. They have contingency plans and continue mulling over more. Venice continued functioning despite 59 inches of water that submerged two thirds of the city in the week after Sandy. It knows the drill. It copes. In 2014, a series of automatically triggered water-walls drilled into the seabed are expected to become operational.

But New York is flat-footed. Sketches were drawn up years ago to deal with severe flooding, but none of them are shovel ready. Sandy exposed urban vulnerabilities that hadn’t been covered in the anti-flooding plans. How useful the old thinking will be in the post-Sandy period is hard to say.

Recently, a group of consultants and hydrologists flown in from Rotterdam suggested that Dutch solutions might not necessarily fit in with New York. “The U.S. is excellent at disaster management,” a Dutch expert told The New York Times, but “working to avoid disaster is completely different from working after a disaster.” Prevention would mean a change in approach as well as huge amounts of money and enterprise.

Meanwhile, the Times, hardly a radical newspaper, revels in doomsday reports, including ones headlined “Is this the End?”, “Rising Seas, Vanishing Coastlines” and “Paying for Future Catastrophes.” Articles pose scenarios that might have seemed silly a few months ago. Will New York and its boroughs become another Ephesus, Angkor Wat or Easter Island? Many a great civilization has made cornerstone cities into the emblems of their civilizations only to see them disappear. Agitated nature has a unique immensity.

The New York bravado is gone. These days we’re quiet and contemplative. We’re glad for the normal. We’ll take a winter that’s good and cold and look forward to a spring with simple showers. We’ll dress for the season at hand and not complain.

Anything but a hurricane followed by a snowstorm will be just fine.