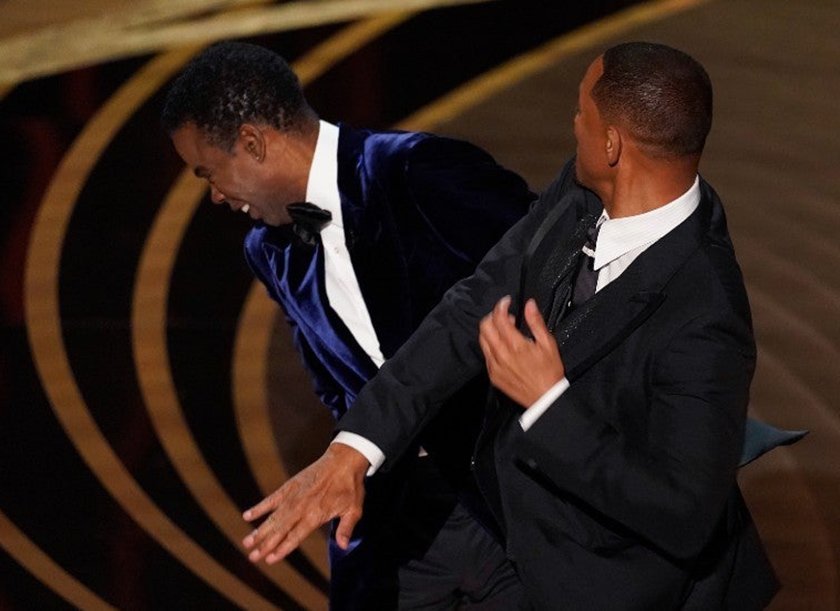 The slap that thundered across the world? Hardly.
N

obody saw the blatant aggression coming. The world stood by in shock as the blow was delivered. Any progress towards civility that may have been realized over the years stalled in the precise moment of the attack. And once the propaganda machines roared into action, the line between victim and aggressor became indeterminate.

This could easily describe the tragedy that began in Ukraine on February 20 of this year. However, that it could also apply to what took place during the 94th Academy Awards ceremony on March 27, when actor Will Smith slapped comedian Chris Rock on stage for offending his wife, is a reflection of the state of society.

It’s not surprising that Hollywood has become the mirror in which society is reflected. For the past forty years, the Oscars (a widely televised event) have served as a barometer for things going on in the world.

The microphone has been a megaphone ever since Vanessa Redgrave first used the platform in 1978 to rail against her critics, who took issue with her documentary “The Palestinian” (1977). Other notable names like Susan Sarandon and Tim Robbins, Michael Moore, Sean Penn, Leonardo DiCaprio, and Spike Lee have spoken out on causes ranging from HIV persecution to getting out the vote. Such statements were either welcomed or criticized by the public, but it did define Hollywood as a liberal bastion with an intentional moral compass.

Such statements were either welcomed or criticized by the public, but it did define Hollywood as a liberal bastion with an intentional moral compass.

The idea of Hollywood as an idyllic land of exalted stars, righteous gods and goddesses occupying a modern day Olympus, has long played well in willing hearts and minds. Over the past couple of decades, though, formulaic speeches have almost become commonplace, and appreciation of recognition masks self-promotion.

But now, because of an action that it has long proven to have abhorred, it shows that perhaps Hollywood’s ethical status has reached its zenith. The latest incident puts the Oscars at the same level as all the other live televised extravaganzas.

Perhaps it was inevitable that this moment of violence, ironically a huge industry money maker (justified as actually being a message of anti-violence), took place live. But spinning gratuitous violence that way sounds even more like an excuse now. Some have said that perhaps it was staged to encourage discussion of social and cultural issues, but such a tactic is too precarious.

Should Chris Rock have said what he said? In the end it was an offensive statement to be making about Jada Pinkett Smith, but Rock after all is doing what he does. Comedians are invited to do just that. Still.

Should Will Smith have gotten up and slapped him? Impulse to stand up for one’s family is one thing, acting upon it is another. Standing for nonviolence is still another.

That will be left up to debate. But what we’re left with is the idea that the illusion of moral correctness has been exposed by those who have been creating it. Perhaps it’s always just a matter of time for the light to be turned to expose self-aggrandizement.

Something larger is at stake, which is namely the idea of celebrity itself.

Moments after hitting Rock, Will Smith was up on stage to accept the leading actor award, and he immediately apologized, though not to Rock specifically. He then went on to say, in a tear filled meandering way that “Art imitates Life.” The statement in and of itself has truth, but at the moment it’s hard not to notice that it sounds more palliative. Especially when the inverse of it is also true, and in this case it was possibly intentionally avoided.

But we are in the age of apologies, and Smith did what has become another part of the formula. When a well-known person does something questionable, an apology becomes quality control, not compunction. In time, Smith’s action may be forgotten, forgiven, but what should be the message? At some point a person has to seriously ask themselves beforehand about how to do what is right and act in a way that does not require the mere, hollow words of apology after. Would anyone buy it if an invading dictator were to apologize?

When history has built a facade, it’s just a matter of time until it gets a crack in it. People may boycott Smith’s movies, the Academy might revoke his award, but there is something larger is at stake, which is namely the idea of celebrity itself. Being liked or popular does not justify impulsive, unacceptable behavior and perhaps that’s the discussion that needs to be taking place.

The Slap heard around the world? Hardly. But small things unchecked can grow in size. Perhaps there is an upside. A slap may force people to wake up and face more important realities of the world: war, disease, environment.

Art and its effects are indeed vital factors in how we engage with these issues, and though sometimes inspiration and even distraction can be healthy, that should never be exploited as a cover for bad behavior.