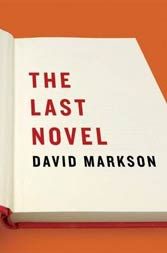 To his irascible credit, Markson swats away genre and spits at conformity. On the face of it, his novel would seem to be little more than an aging writer’s fragmented recitation of sayings, anecdotes (mostly literary), random truths, and socio-political preferences (“Before the Euro, the portrait of Yeats on Ireland’s twenty-pound note. America’s Whiteman twenty-dollar bill, when?”)

His provocations are unrelenting, erudite, and span 5,000 years. “A novel of intellectual reference and allusion, so to speak/minus much of the novel,” announces the “Novelist,” who is Markson’s sour raconteur. Novelist wants “obstinately” to deliver “cryptic interconnective syntax,” and does so his way, which is part of the point.

Gradually, though, the flash-bulb erudition illuminates a spectacular mosaic. Preferences become character and anecdotes breathe life into the disembodied skeptic. It’s not only a fully-formed literary broadcast — and yes, a novel — but a backwards-conjured representation of an old writer who won’t give up the ghost, let alone his hard-won influences. The observation “Far too much music finishes far to long after the end. Judged Stravinsky.” appears on the same page as “Novelists personal genre. In which part of the experiment is to continue keeping him offstage to the greatest extent possible — while compelling the attentive reader to perhaps catch his breath when things achieve an ending nonetheless.”

But Novelist is the stage (“Old. Tired. Sick. Alone. Broke.”) and this is as bluntly worthy a fictional venture as a reader is likely to encounter in a time of abundant trifles. A book of themes is also a book of life.