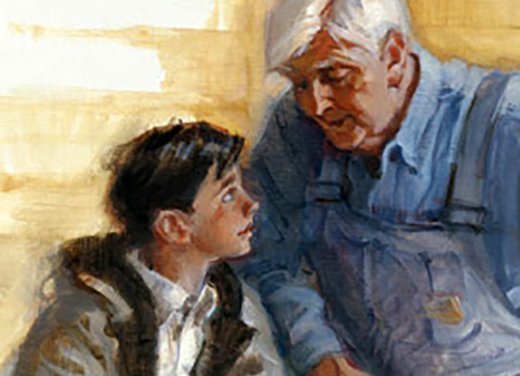 he old ambassador had me at “hoodwinked.” When he added “bamboozled” and “railroaded,” I was in Seventh Heaven, as always wondering just who had made off with the first six celestial bodies.

The old ambassador was not, in fact, a true ambassador, though it hardly mattered to me at the time. He was a career foreign service officer who had received the rank as a parting homage, “just a silver watch,” he related one day as if I’d understand, though at the time the best I could do was imagine its ticking.

Such political details hardly mattered when it came to soaking up stories of Upper Volta, Mongolia, and a handful of other countries my mind’s eye situated midway between make-believe and Jupiter’s red spot.

Elders — and old ambassadors specifically — existed, above all, to mesmerize impressionable children, carrying them off to places they might otherwise never have imagined, let alone looked for on a small globe in the family living room.

The spell eloquent elders could once cast unquestioned is made incidental in an age betrothed to the less eccentric appeal of pixel-addicted storytelling. Far too many contrivances can now be instantly debunked, and elders were very much on speaking terms with myth.

Thankfully, I knew a bit about bunks but nothing about debunking. I relished how the old ambassador feasted on jargon, and how he’d found himself feeling bamboozled when trying to identify a tribal meal of boiled lamb testicles. Or how the locals later hoodwinked him into dining on the organs by calling them “special cooked dates,” a line he somehow swallowed, and the odd food with it, railroaded, as it were, by his hosts.

Only in Inner Mongolia, of course. And only, no doubt, in the 1920s, which also came with “doozies” and “flappers” (I thought they were birds), mobsters (of these I was aware), and transpacific Matson liners that took three weeks to make an ocean crossing, stopping in Hawaii along the way. How else could you get to China (while also “ogling dames”)? Or to Imperial Japan, so determined to expand? Or to Hong — not King — Kong (who knew they weren’t one and the same)?

“The world was a much bigger and wider place then,” the old ambassador declared, reminding me that jets didn’t cross the smaller Atlantic daily until the early 1960s. “Before that, we had lots of time to walk lots of decks and think about why the Atlantic in winter never seemed to tire of raining cats and dogs.”

The old ambassador always enjoyed a small glass of vermouth with my parents before they would depart, leaving him behind to child-sit for a few hours. I was given a taste of vermouth and wondered why it was adults insisted on sipping such vile liquids for pleasure.

On catching sight of an exotic beauty — off again on some foreign mission — the old ambassador and his fellows were “flummoxed by this apparition,” something that had never happened to me in the presence of a girl, domestic or foreign, and I had walked the Earth a good while in my long seven years.

The old ambassador told me of the time he “drank a Belgian diplomat under the table” prompting me to wonder if that was where all hoodwinked drinkers eventually ended up. “Just a figure of speech,” explained the old ambassador, who always came equipped with a number of them, and with words. Oh, the words, words of all kinds, brands, and vintages, proper nouns and their improper cousins.

“Did you know your eyes are filled with aqueous humor?” he once posed. I never thought eyes were so funny until my enlightenment. Who else but the old ambassador would use “antibody” in a line about the need to rise up against tyranny?

Did Superman rank among those characters he considered “supercilious comic strip” frauds? He solemnly asked for my thoughts on the matter, but I was quick to seek refuge under the (drinker’s) table, no doubt flummoxed.

He told me of meeting his grandfather, a farmer born in Defiance, Ohio, in the mid-19th century. He’d once invited his grandparents to visit him in Europe, offering in 1950 to pay for their crossing on a prop plane. But his grandfather wanted no part of such travel nonsense. “If the Lord had wanted us to fly, he would have given us wings,” he had sardonically rationalized. They never did set foot in an “airship.”

“You can’t change people,” the old ambassador wisely told me in a rare subdued moment. “You can only be one person, and try to be a good one, until you’re not around anymore.”

I wanted to know more about the not being around part, curious as ever about the long road to Seventh Heaven, but he veered off toward some other adventure, and, as always, took me along.