The Last Days of New Paris 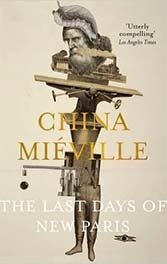 British fantasist China Miéville’s reinvention of postwar Paris is an ingenuous homage to the sorcery of Surrealist art. It is 1950, and the ruined capital is occupied by war-winning Nazis who must now contend with the banshee manifestations of ideas, paintings, photos and collages lifted from decades of Surrealist and Dada art (with a side order of Fascist Futurism). Imagine dozens of Magritte, Yves Tanguy, Man Ray and Dalí concoctions given animated heft and let loose to wreak havoc — trains become wolf-tables become sperm silos become garden airplane traps. These “manifs,” canvas-born interlopers, made Parisian landfall in 1941 after a mishap involving a box-sized machine created by an over-eager American rocket scientist named Jack Parsons. Captivated by the Surrealist movement (he dines with André Breton and co-conspirators in Marseilles) — “knowledge poured out of everyone…” — Parsons decided to “wire” fantasy against fascism. If only his dream-catching warhead hadn’t been stolen and blown up in Paris, “the S-Bomb,” leaving the city (Germans, Resistance fighters, and Marxist-leaning Surrealist recruits) up against the maverick mojo of dozens of occult minds run amok.

Into this brave imagined world comes Thibaut, a young Surrealist-socialist warrior dressed in ragged but courage-abetting pajamas (conjured from a poem by Simone Yoyotte). He and his colleagues in the La main à plume movement (the real name of a clandestine Surrealist “cadre”) seek details of a Satanic Nazi project codenamed “Fall Rot” whose architect is none other than Josef Mengele, he of the “crooked gap-toothed grimace.” Thibault in turn is partnered with an Allied spy named Sam, modeled on American war photographer Lee Miller. It’s Thibault, Sam and the “Exquisite Corpse,” a giant mix-and-match Surrealist creation, against the forces of “science and demonology” — a postwar war on Miéville’s terms, beginning with the S-Bomb and its florid aftermath, “a fucking storm, a reconfiguring, a shock wave of mad love, a burning blast of unconscious. Paris fell, or rose, or fell, or rose, or fell.”

Purple prose aside, this is a Saturday matinee novel with “Raiders of the Lost Ark”-“Ghostbusters” trappings. Fair enough, if only Miéville knew to put a lid on artist name-dropping, which he doesn’t — “Paris with its manifs. Breton, Char, Dominguez, Brauner, Ernst, Hérold, Lam, Masson, Lamba, Delanglade, and Péret, purveyors of the new deck [of cards].”

And while there’s no challenging the author’s cartwheeling mind, the human side has a stilted feel. Hero Thibault and cohort Sam are brittle interlopers in a story most at home with its conjured beasties. Miéville seems to know this, attaching an exhaustive postscript-cum-glossary detailing the historical roots of his stunning conceit, one that might have been better served by a long short story.