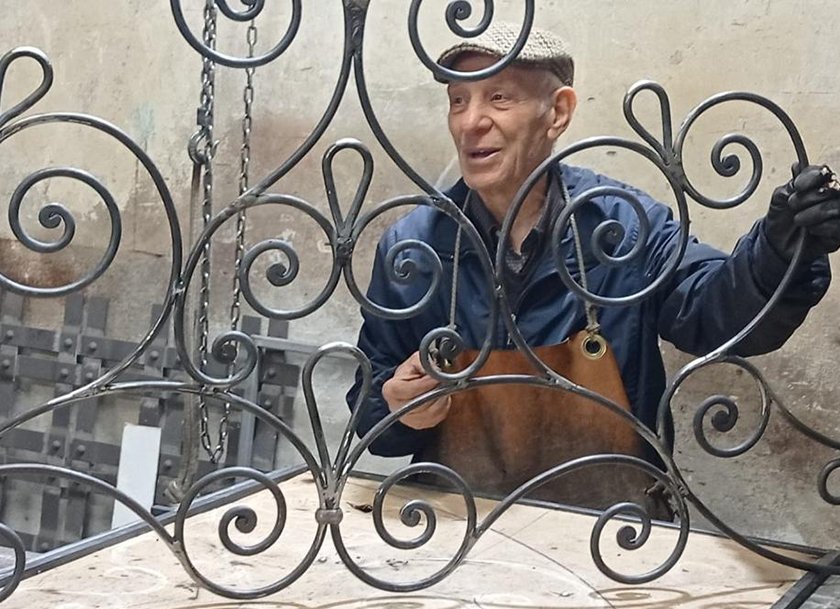 ver the last 20 years, I have been living in Presicce, a village in Salento (in the far south of Apulia), whose old town is numbered among the “borghi più belli d’Italia,” that is to say, the most beautiful villages in Italy. During the 18th and 19th centuries, Presicce (now Presicce-Acquarica, after the two already deeply interwoven communities decided to become one administrative unit) thrived as one of the centers for the production of olive oil.

The oil produced in Presicce and the rest of Salento was not used for cooking or dressing salad, as it was too acidic. The oil served other purposes: lighting, lubrication, the making of Marseilles soap. From the port of Gallipoli, about 20 miles south of here, the oil was shipped to the rest of Europe — to places as far as the British Isles, France, Norway, and Russia. Today’s Salentino EVO oil is, of course, an altogether different kettle of fish. 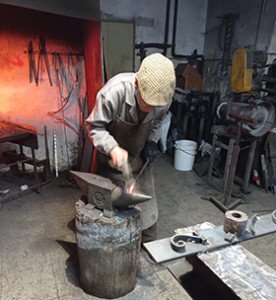 Until the late fifties, artisans played a significant role in the everyday life of the village. They produced all sorts of tools, vessels and containers, footwear for the families of peasants, pieces of traditional furniture, clothes, or offered repair services, and even built means of transport. There were carpenters, blacksmiths, farriers, tinsmiths, coopers, cobblers, seamstresses, and tailors. Shopping bags were made by plaiting rush or braiding split reed, both plants growing in abundance in the nearby marshes. Particularly skilled artisans built carts for farmers. The huge, multiple-spiked, wooden wheels of these rough vehicles could be seen leaning on the outside walls of the manufacturers’ workshops.

Several of these craftsmen worked in ancient premises in the old town, generally inherited from their fathers. The street was an extension of the workshop and, unless it rained, a lot of activity was performed outside. People often sang while working, especially when working in the open. During the patronal festivals, they would listen with a critical ear to the band playing arias from their favorite operas. Later, they would go over the performances with each other. Some of them had taught themselves to play an instrument. Young men in love would often hire them to play a serenade under the window of their “bella.”

All this now belongs to the past. This ancient way of life of the rural communities of this part of Italy slowly faded away in the course of the 1970s and 1980s. The products of our skilled artisans were inexorably replaced by the constant output of industrial mass production.

Yet hints of that ancient civilization still survive. Should you happen to be in Presicce and to walk down Via Eugenio Arditi, starting from Piazza Sandro Pertini and heading for Piazza del Popolo, the heart of the old town, you might hear a hammer resounding on the anvil. It is “Maestro” Arnaldo Frazzetto, working in his “bottega,” just round the corner of a side street. He calls himself a blacksmith, maybe the last representative of a tradition of master blacksmiths, but he is really a great artisan and a renowned artist.

Arnaldo Frazzetto was born in nearby Acquarica, on November 19, 1934. His father, a Sicilian butcher who had come to Salento to visit a relative, married a local girl. Arnaldo is one of their six children. A few years later, the family (including Arnaldo’s twin brother) moved to Sicily, but Arnaldo was left behind with his grandmother, of whom he was very fond.

Not long after finishing Elementary School, Arnaldo started working as an apprentice blacksmith. He toiled for hours every day, helping one of the master blacksmiths of the village, learning the basics of the trade. “It was hard work, but no pay, as was the custom of those times. You had just to be grateful to be learning a job,” he reminisces. Only years later, when he was 22, did he start receiving 200 Lire per week, “equivalent to one evening at the village cinema.”

At the time, blacksmiths mainly produced rough handrails for balconies, banisters, or simple tools for the local peasants, hoes, spades, picks, but also objects for everyday use like latches, spring locks, pots, braziers, pokers, coal tongs, and, most certainly, horseshoes. In some cases, horseshoeing was their main activity. He was unsatisfied. The craft of blacksmith could not be only this. 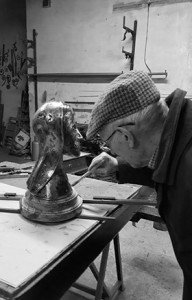 Arnaldo Frazzetto adds the finishing touches to a piece of sculpture.

At 24, like many other Salentino young men, Arnaldo Frazzetto migrated to Switzerland, and settled in Geneva, where he worked for 14 years in a large ironworks firm. He was soon appointed “chef d’équipe” (team chief).

In 1972, he came back to Presicce and started his own trade. Here, in his free time, he could give full rein to his creativity.

To him, iron is a challenge. If something strikes his imagination, be it a human face, an animal, a flower, he cannot wait to recreate it in wrought iron, but also in, or in association with, bronze, brass or aluminium.

His precious works of art, small objects, like complicated ancient latches, bedheads, perfectly reproduced old-fashioned lamps, or imposing, highly elaborated and richly decorated banisters, are in the houses and mansions of Presicce and all over Salento.

Maestro Arnaldo is 87 years old, but he is as trim and lively as ever. He still spends six or seven hours a day in his workshop, working at the forge (“forge is the base,” he likes saying), hammering red-hot iron on the anvil, drilling, milling, and soldering. He has even built his own bending and forming machine. Around ten o’clock, he usually has a break for a typical Salentino “merenda” (snack): a slice of bread with a couple of tomatoes squeezed on top, dusted with a pinch of salt and sprinkled with the excellent local olive oil. When I went to see him last, he had just fixed one of the ancient wooden cartwheels to a four legged, and artistically convoluted, wrought iron base. “It will be completed with a glass top,” he explained, “and will make an original garden table.”

The Master laments that his art will disappear with him. “Nobody wants to learn this craft any longer, or any craft, for that matter. It’s sweat and toil, and time consuming. Today all people want is to sit down in an office in front of a screen.”

Next to his smithy he has a small exhibition of some of his most interesting works, from which he does not intend to part. “They’re for my children,” he explains. One of the most striking of these precious artworks is an eagle. The bird is frozen in the act of alighting on an olive bough, its majestic head slightly turned right, wings still spread, its body covered with sharply designed feathers, wrought and welded to the body, one by one. Maestro Arnaldo, who seldom watches television, explained that he saw a magnificent eagle descending on its perch while watching a documentary, years ago, and was so mesmerized that he immediately felt the urge to reproduce it. His photographic memory and his skills, refined in the course of 70 decades, made the trick. 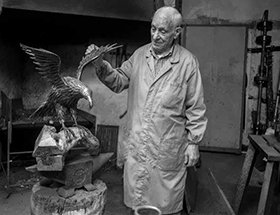 The Master with his eagle.

In preparation of the visit of Pope Benedict XVI to the Sanctuary of Santa Maria di Leuca, less than nine miles south of Presicce, on June 14 2008, a delegation of the local episcopal curia went to see the Maestro in his workshop. They asked him to reproduce the Pope’s escutcheon. He made it, in wrought iron, of course, painted gold, and it was inserted on the upper part of papal throne, still visible on the presbytery of the Basilica.

The wrought iron railing separating the two halls of the Museum of the Basilica of Santa Maria di Leuca is another of his masterworks.

His workshop is often visited by tourists, flocking to Presicce from all over Italy and Europe, especially in summer, allured by the picturesque alleys and architecture of the old town, and, it goes without saying, by the crystal clear water of the Ionian Sea, about three miles west. They are all eager to hear his story and, possibly, to take back home a small creation by Maestro Arnaldo Frazzetto, the last master blacksmith of Presicce.