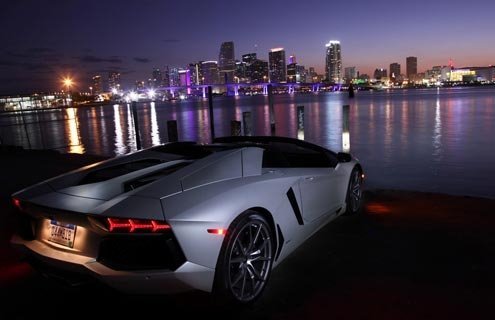 y 3 p.m. appointment, a woman of means with an easy self-assured manner, entered my office holding an official looking envelope.

She had come to Italy three years earlier from Rhode Island to attend a playwright retreat in the Umbrian town of Spoleto and was smitten by a stone farmhouse for sale in the nearby hills. She bought the house and the six acres of fruit and olive trees surrounding it.

Learning that she had to be a resident of Italy to own a car, she got an “elective residence” visa from the Italian Consulate in Boston and registered as a resident of Spoleto soon thereafter. With time and given the allure of the beautiful Umbrian roads, she had indulged and purchased a Lamborghini Aventador LP 700-4 Roadster.

She said she still owned a home and a theater company back in Providence, was a beneficiary of a U.S. trust set up by her ex-husband, and had all of her other investments in the U.S. Her plan had been to spend most of each year in Italy and that’s what she had begun to do.

Then the notice arrived by registered mail.

She handed me the envelope with a sheaf of papers from Italian tax authorities and cover letter of a kind I’d seen many times before.

Tax officials had noticed she was a resident of Italy and that she hadn’t declared any earned income, foreign investments or bank transfers on her Italian income tax return. At the same time, she had a valuable home and a Lamborghini registered in her name. They were wondering how she could afford such a lifestyle. Now they wanted her to come in for a “talk” and she was scared.

The stakes were high. If she were considered a resident of Italy she could be found liable for failing to declare her investment income and assets in the U.S. – as well as the bank transfers she made into Italy to support her lifestyle. This could involve severe civil and criminal penalties retroactive to when she first became a resident.

I told her that and her confidence wavered.

“But look at all the money I spend here,” she stammered. “Italy would be crazy to treat me this way!”

I had heard this argument before and knew it had no basis in law.

I went on. “Italy is in debt and is out to collect all possible taxes,” I told her, giving her a thorough rundown on residency laws.

The Italian Tax Code, I told her, defines a resident as someone who for the greater part of the year is either registered as a resident at the anagrafe (municipal records office where the individual lives) or, referring to the Italian Civil Code, someone who has a habitual abode or a principle center of business and interests in Italy.

If you’re in Italy more than one-half of the year and qualify under one of the definitions, I continued, you are considered a tax resident and are liable for taxes to Italy on your worldwide income.

She wasn’t happy. “That’s all fine, but I have my business, a home and all my money in the U.S. I vote and have a driver’s license in Rhode Island! I pay all my taxes in the U.S. I’m a resident there as well. I’ll not stand for this!”

I went on to explain the tax treaty between the U.S. and Italy that recognizes that a person may actually be resident in both countries. Tax officials examine the pertinent facts to determine with which country the taxpayer has a closer connection.

“I should be able to decide where I am resident,” she said.

“You have, and you’ve chosen both countries,” I countered, sorry to see her in such distress. At the same time I had an obligation to warn her about the risks. Where someone is taxed is not a personal choice, I told her. It was one thing to argue her life was primarily in the U.S. when she was only in Italy for a few months a year, quite another having registered as an Italian resident and spent most of her time here.

A loaded quiet filled the room.

She began softly: “Are you saying I should be paying taxes to Italy?”

“I’m saying Italy has laws, including the treaty, that apply to you, and to your specific situation and ignoring them unfortunately puts you at peril. A U.S. citizen resident in Italy files tax returns in both countries.

“Then I pay twice?” she asked incredulously.

“The treaty specifies to which country you pay tax on each category of income, and in most all cases it’s to the country where you’re a resident. The other country then gives you credit.”

“Then what about these papers?” she asked. “I’ve seen them before,” I replied. “We’ll set up a meeting with a commercialista (Italian accountant) right away but for future tax purposes you need to reflect on your residency.”

She thought this over, and then, almost embarrassed, asked, “and if I give up my residency in Italy, what happens to my Lamborghini?”