The Kiss of the Spider Woman 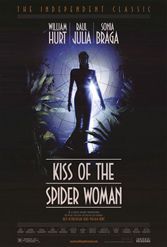 Argentine-born Brazilian Babenco is sensitive equally to claustrophobia and homophobia. He makes the odd couple’s cell into a stage and Luis’ stories into mesmerizing parables for dictatorship, totalitarianism, and, more simply, intolerance. Though resistant at first, Valentin gradually participates in Luis’ escapism. Hurt is single-mindedly outrageous, pushed to do something he’d never done before nor attempted since. Juliá, who died in 1994 at 54, is ramrod straight.