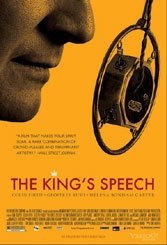 In common with “The Queen,” a similar historical snapshot, it humbles and humanizes contemporary royalty to make the throne’s major players more sentimentally accessible to skeptical audiences. The film opens in 1925 with the duke unable to mouth the words of a speech on his royal father’s behalf, and concludes with the outbreak of war, after Logue has worked painstakingly to improve the duke’s self-belief and self-esteem. David Seidler’s clever script uses the duke’s uneven childhood and Logue’s unconventional rescue efforts to pay backhanded tribute to the prewar awakening of psychoanalysis, until the 1920s and 30s trivialized by many as loony science.

It also contains the requisite balance of royal pomposity and self-deprecation. Commoner Lionel demands that patient and healer behave as equals, to which the stammer-shamed duke snaps: “If we were equals I wouldn’t be here.” He chafes at Logue’s insistence on calling by his nickname Bertie. Later, their friendship becomes fundamental.

Few monarchy-related films are as convincingly at home in their moment as this one: Nazi Germany looms and Edward (Guy Pearce), the duke’s brother and heir, is in the thrall of American divorcee Wallace Simpson, a romance that will cost him his throne. England, says ever-earnest Bertie, is caught between Hitler’s jackboots and Stalin’s proletarian abyss.

But while the history lesson is useful, it is also so much background noise, as are dutiful nods to Lionel’s family and the duke’s supportive wife (Helena Bonham-Carter as the queen mother-to-be). The meat and potatoes of the film is Firth. He assuredly embodies a flawed man who wants desperately to repair himself while at the same time saving face, a twitchy balancing act in an era in which class hinged on social distinction and stylishness meant concealing vulnerability. Firth is very much in a class by himself. If only a cloying soundtrack didn’t try to help him along.